Wondering why all was quiet on the Perot social media front last week? Ok, maybe you didn't notice, but we were pretty much MIA on Facebook, blog, and email. The reason being that Joey and I were involved in one of my favorite service projects of the year: Houston Project.

Houston Project is put on by Houston's First Baptist Church and is a city-wide effort to reach inner city areas of Houston with the love of Christ. For one week volunteers are sent to impoverished areas within Houston that are in need for not only food and clothing, but for the Gospel.

Normally, I have worked with the vacation Bible school part of Houston Project. It's basically VBS, but in the evenings. We usually canvas the neighborhood in the area the week before to let all the parents know. You volunteer as a Sunday school class. This year we were with the Newlywed Class that would be serving at a brand new project site in the Third Ward and we were late to sign up. My comfort zone of VBS was full and the strongest need for volunteers was with the Evangelism Team. Yikes! Evangelism in the Third Ward. Joey and I had never really done that kind of evangelism before. I prayed through it and decided that if that was what was open, then that must be where God wanted us. And on that note, He must know the words to fill my mouth in order to speak the love of Christ to these people because heaven knows I can't do that on my own. So we signed up for the Evangelism Team.

Houston's Third Ward begins just a few blocks away from the UofH campus. It's the kind of neighborhood where you would probably check to make sure your doors were locked and try not to make eye contact with the bum on the corner. Houses are small and run down with broken windows and screen doors with a sprinkling of chipped paint. There seem to be people everywhere. Walking the blocks. Gathered in small groups at corners. Watching from their front porches. The porch gathering I later found out is due mainly to the fact that many do not have air conditioning. Some without running water. Each block seems to have its own flavor. You might walk past an entire block that is structurally run down, but clean and well-kept. Others are littered with trash and the houses falling to pieces. That seems to be contagious.

Mixed in among this is Generation One. Run by a couple with a heart for reaching these people with Christ's message of love, it has an after-school program for neighborhood kids along with several other mission initiatives for the Third Ward. The VBS portion of Houston Project was stationed at the Generation One building. The program for the youth was held a few blocks away at the neighborhood YMCA. This featured a basketball tournament for the guys and a spa set up for the girls. The Evangelism Team's assignment was to split up into two groups, one building relationships with kids at the youth site and the second to hit the street and visit the people within the community. Generation One had done several service projects during the past year such as painting houses, construction work, etc. and we were to visit these homes where they had already established a relationship. The last day we would have a cookout in a vacant lot in the neighborhood.

Joey and I visited with kids in the gym the first two days. It was pretty tough. The guys were especially kept at a distance by the neigborhood guys. One thing I noticed in walking around the neighborhood, was an absence of father figures. It seems like they are distrustful of men. I was able to talk with a few girls and one in depth conversation with one girl in particular. I was also able to visit with a few of the Moms that came to watch their sons play ball.

A quick side story. Joey was walking out to his truck in front of the Gen1 site when this little boy ran up to him and said "Hey, watch this!" He proceeded to step up to Joey's truck and started punching the key pad. Click. He unlocked the truck! Joey was shocked and asked him how he did it. "Oh I watched you do it earlier." Wow. Note to self.

The third day Joey and I, along with the other 6 on the Evangelism Team knocked on neighborhood doors and talked to people on the street inviting them to come to the cookout being held the next day in the vacant lot. The other half of the team who had been knocking on doors had learned that cookies seemed to be a way to get them to let their guard down. So, we would knock on a door and offer them the cookies, ask if there was any thing we could be praying for them about, and invited them to the cookout. We only had one turn down the cookies (toothache), no one turn down prayer, and everyone seemed interested in the cookout. "Free food, really? Why are you doing that? Ok, I might come by." We made friends especially with the people across the street from the vacant lot. Mrs. Christine, Mrs. Angel, and Mrs. Linda seemed to be at the hub at their block. They knew what was going on with everybody and they were extremely helpful in pointing us in the right direction.

The cookout was so much fun. Word got around. We served about 120 or so people hot dogs and hamburgers. There was a man named "Shaggy" who had a large van with a DJ like sound system that played music for us the entire time. A volunteers played dominoes with people down the street. I think Joey and Aaron said it best "It's like we're just grilling and hanging out with a bunch of friends." They were all so welcoming and thankful. The kids of the ladies mentioned above were there and were incredibly sweet. We recommended some of these kids to Generation One's after school program so hopefully they will be able to get involved. We are hopeful that establishing these relationships will soften the ground for Generation One. 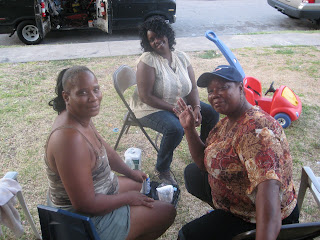 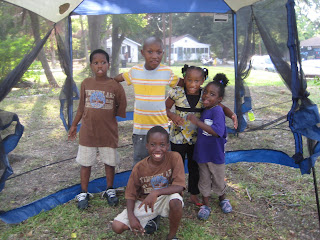 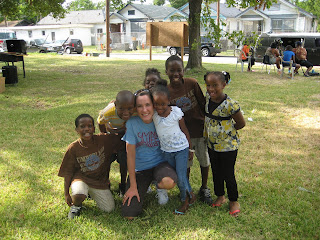 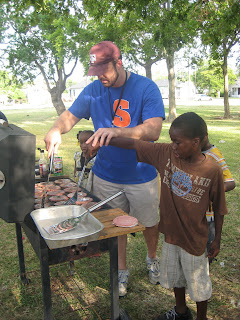 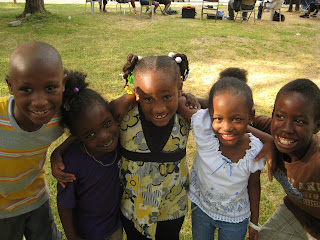