Yes, You Are Beautiful

My husband is the best. I mean, he's really tops.

I bought a belly band that came with this little magnet in the package: 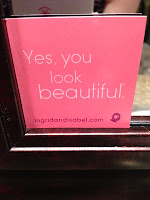 The manufacturer is smart. They clued into the fact that after one goes through the process of wiggling on a belly band, one is increasingly more aware of your widening thighs, hips and belly. So I guess this is to lighten the belly band induced blow a little.

I was planning to throw it away.

And then I had a really bummer of a morning that happened to include going through several outfit changes because things were either too small, too tight, too short on my tummy, made me look like a sack of flour with a concentrated lump, etc.

This experience was added to a really bad hair day. Not only have I not been to the salon since I found out I was pregnant, but I also haven't been able to run to the store the past two weeks and was out of shampoo. I've been using my husband's Head & Shoulders shampoo. Aside from smelling like Old Spice all day, there are other reasons this is a man's shampoo all of which translate to Homeless Hair.

To note, I would look like Sack of Flour with Homeless Hair for the rest of my life if it meant having this little baby girl. Hands down!

I was just having a low physical self-esteem day which we girls sometimes have to shake out of our systems every once and a while.

I ran across that little 'Yes, You Look Beautiful' magnet later on that morning and placed it on my mirror.

This was the day before yesterday. My husband left on a business trip yesterday and was away last night.

When I went to brush my teeth last night the magnet was gone and in its place was this: 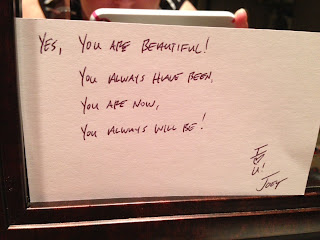 Earthly beauty obscured my vision for the day, but my husband reminded me of the way that Christ views us. He thinks we're beautiful - the most valued of all His creation! He replaces the world's cheap statement of beauty with the real thing. How quickly I forget.

I'm sure our little girl, like all girls, will have a day(s) where she feels not so pretty. I'm hoping I can remind her that she is daughter of the King. And if she forgets this, He has given her an incredible earthly gift to help remind her of her true beauty and value:

She is my husband's daughter. 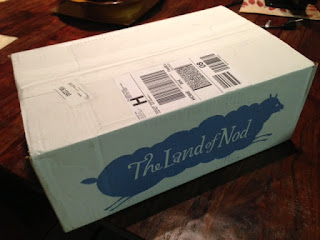 Look what was waiting at home for me today!

Don't you just love packages on your doorstep?

Especially when they contain fun stuff for a certain little baby girl's room.

They're the curtains for her room. Isn't that crazy? Someone else actually has a 'room' in our house! And now she has curtains! I know, it takes me a while... I still say to Joey all the time "Did you know we're married?"

The bedding is back ordered so this is the first of several packages that should be coming our way soon. 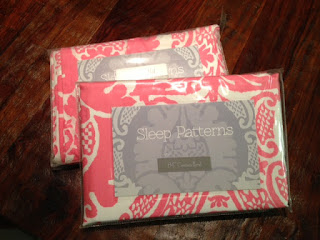 As you can guess from the curtains, the bedding is pink as well. Different pattern, but pink. I'm still deciding, never having really been a Pink Girl growing up myself, whether this is a good fit. Remember on Sleeping Beauty when fairy godmothers Flora and Merryweather keep changing Princess Aurora's dress from pink to blue? I always sided with Merryweather on the dress.

But gosh darn it, it's so fun! As I've aged I've turned into more of a Flora.

I tried to convince Joey to go for the princess carriage theme below which everyone seems to be doing these days, but he didn't want her getting carriage sick during nap time. 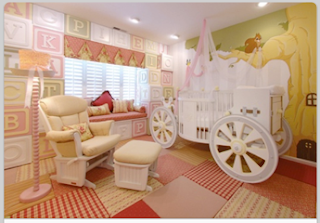 Seriously. Was this on Pimp My Crib or something?

I'll be able to make a better decision once the bedding arrives. Afterall, we have four months, right? I have a feeling this is going to go by very quickly! 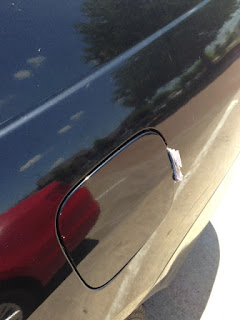 And I love her 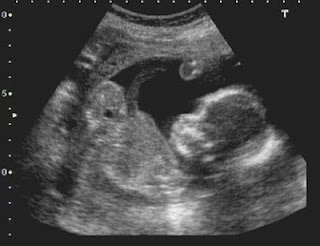 Well, we're just a few months away from meeting HER!

That's right, the P in the Pod is a girl! We are so excited!

One question is answered and in its place have come so many more.

Will she be a tom-boy or a girly-girl?

What will her name be?

Will she be outgoing or kinda shy?

All I know is that she will be very well-protected. Joey immediately declared that he was going back to gym to become the Gladiator.

And loved. This I know most soundly. She will be very loved.

Here's what we know so far about our little girl:

She has a healthy heart and brain.

She's already an Aggie. We're pretty sure this is her gig'em. 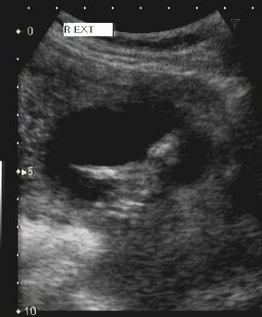 She may be fairly expressive. We deny that she's doing the Raider's Guns Up sign below and would much rather believe that she's throwing gang signs. 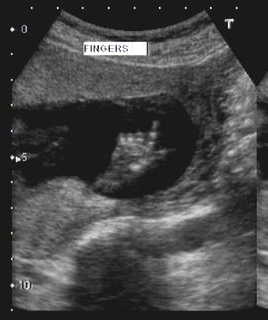 She's a big girl; measuring six days ahead of schedule.

She also may be a chatty. Her little mouth was moving a lot - which of course, we loved.

These are her first outfits: 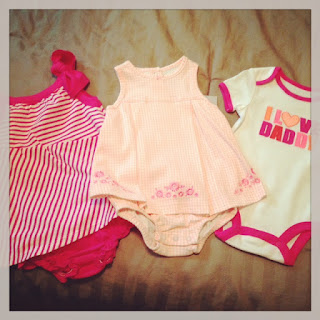 I'm not sure if she'll be a pink kind of a girl, but we might as well have fun with it now!

We've loved this baby since the first day we were aware of her existence and we're thrilled to know all these little details about her.

One impatience has led to another. We now know we have a little girl coming our way, but now we're just oh-so-ready to meet her!