Where would you go?

I was in the lower level of a parking garage a few weeks ago and noticed under the next level up's ramp,a tucked away cubbyhole big enough to fit a large refrigerator box and I said to myself "If I were homeless, that would the perfect place!" Apparently, I am not the only one who does this, identifying potential homeless hotspots, that is.

I started playing this game a long time ago. There was a park where I grew up that had these log houses/forts. They were perfect for playing house. I always thought if I needed a place to stay, that's where I would go. People had picnics at the park so there was plenty of food left over. If the squirrels could do it, so could I. My second choice was to live in one of the playhouses at Toys 'R US. No one would notice, I'm sure. And so it began. I see a nice dry bridge that might work beautifully or places that are open all night and make a mental note.

When I was in college, I used to go the West Campus Library one semester, every night from 11pm -3-ish am. I noticed this little guy would come in every night around midnight. He always wore the same clothes and had a bulging and battered backpack. He looked like he was in his twenties, but didn't really fit the bill of a student. He would find a study carrel, set his bag down, pull a very large book out of the bag and place it on the desk. Then he would just lay his head down on the book and go to sleep. At about 3:30 AM he would get up, load his things, and leave - never cracking a book. This went on for about a month before I realized that he was homeless. This trend continued the entire semester until my schedule changed. One night, I was able to get a look at the book that he put on his desk each night. It was a dictionary. A library! That's the perfect place! And the book - what a great touch! He was warm and had shelter every night. Pretty clever.

I have a running list of top places, but I think I'll just keep them to myself. Who knows when I'll need them and I would hate to find The Perfect Place already taken.
Posted by Jenny at 5:52 PM No comments:

This past weekend, Joey and I decided to paint our dining room. This has been on the To Do List for a while and a rainy day weekend was just what we needed for motivation. Choosing a paint color, to me, is like Chinese Water Torture. I had been going back and forth on paint colors for several months, much to Joey's Quick-to-Make-Decisions frustration. He had other suggestions for colors such as Tree Bark, but I really wanted a reddish room. I was looking for the color tag entitled "Red, But Not Too Red, Maybe an Orange Undertone, But Not Orange and Still Definitely Red". I just can't imagine why this color wasn't listed! At his encouragement, I decided on Cedar Chest. In my mind I was envisioning an understated spice/rust red, tying in a few accent colors in the kitchen. What I got was definitely NOT that. Apparently, Cedar Chest is synonymous with Fire Engine/Blood Red. 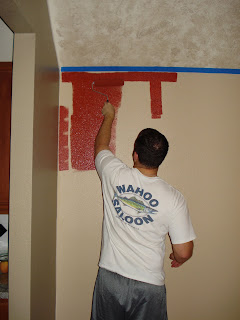 Joey preparing for what looks like Passover
Both of us thought well, maybe it just takes some getting used to. So we painted one wall. Then we sat in the dining room and just stared at the wall. Nope, there is no getting used to it. It had to go. That's it, I said! "I am DONE! This seals it, I am terrible at picking out paint colors. Joey, you go pick it out! I can't bear this rejection again. I'm finished!" I know a little dramatic, but keep in mind that this was not my first experience to be spurned by a paint color. I've been around the color wheel a few times. After much encouragement from my loving husband, Joey talked me into at least accompanying him to Lowe's, where we picked out Tree Bark. This is the color he wanted in the first place. And true to form, he picked out The Perfect Color. Although, discouraged that I will definitely not be the next Martha Stewart, I am incredibly blessed to have a husband who's paint selection skills rival those of Nate Berkus! Thank goodness!
Posted by Jenny at 5:59 PM No comments:

Of aloe vera. Thanks to a weekend of intramural softball, I am burnt to a crisp. I may still have these tan lines when I'm 80. And they are nice let me tell ya. It's a tank top and partial face burn. The most frustrating part is that I put on sunscreen. Do compound word additions "screen" and "block" no longer mean what they did yesterday? I feel so betrayed! It's like getting shot by the police! A false sense security, I tell you. Ok, and I said that the most frustrating part was that I put on sunscreen, but I was mistaken. I reminded Joey to put on his sunscreen and I think he slapped a little haphazardly on here and there. Is he burnt? Nope! Not that I want him to be burnt, (one of us has got to be healthy enough to keep the aloe vera comin') but I can't help but exclaim "Wha? No fair!". It's like coming to class every day and failing a test, when the guy asleep on the back row makes an A. I'm not sure if my mistake was in not reapplying, too low an SPF, or maybe can sunscreen expire? Not sure. Bottom line: I used sunscreen and I'm still burnt.

This reminds me of the Sunscreen Song. Anyone remember that? Not quite so foolproof advice I guess. Oh well. Hopefully, it will just result in a few more freckles on my shoulders and if I amass enough of them maybe it will look like a permanent tan. Just maybe?
Posted by Jenny at 5:48 PM No comments:

Are we currently seasoning in reverse? I thought we were past all this or was last week just a tease? Dedicated to the ever changing Houston weather...

You change your mind like a girl changing clothes

Yikes. So I haven't posted in over a week. As usual, you can infer that things are busy! Here's the Catch Up:

Joey and I went to Louisiana to hang out with his family and celebrate the upcoming wedding of his brother Josh. Josh and Haley had a super fun party last Saturday. We left Houston and it was 70 degrees on Friday. By Saturday evening it was in the 40s and the party was outdoors. And of course, ever unprepared, we had on 65 degree clothes. Jenny and Joey Popsicles.

And this past weekend, Joey and I were so blessed to witness our friends Brent and Lacey's wedding. For those of you that know these two, you know that this has been a journey as Lacey lost her Mom a little over a month ago. Their wedding was such a testament to the faithfulness of God. Anytime you get to witness people in the midst of one of the toughest seasons of their lives say that they know that it's for God's glory and they are going to have faith in his perfect plan despite not understanding it - anytime you get to see this - take a picture of it, mentally speaking. What an encouragement. Lacey looked absolutely beautiful!

There is also one more thing during my blog absence that I wanted to comment on. Did you watch The Bachelor? What in the world is going on? I was in and out for the last three episodes so I will admit that I have not been faithfully following the season, but geez, has reality TV hit an all-time low or what? As if dating and becoming emotionally attached to multiple people is not bad enough, we put it on TV and glamorize it. It's pretty telling about the throw-away view our society has on relationships. And by the way, this is supposed to be the fairy-tale-dream-come-true kind of show. This is a picture of The World trying to do relationships. And it is a cheap substitute for the sanctifying relationship that God has intended for us.

Thank you for letting me rant on the last one and I'll try to keep up!
Posted by Jenny at 8:47 PM No comments: