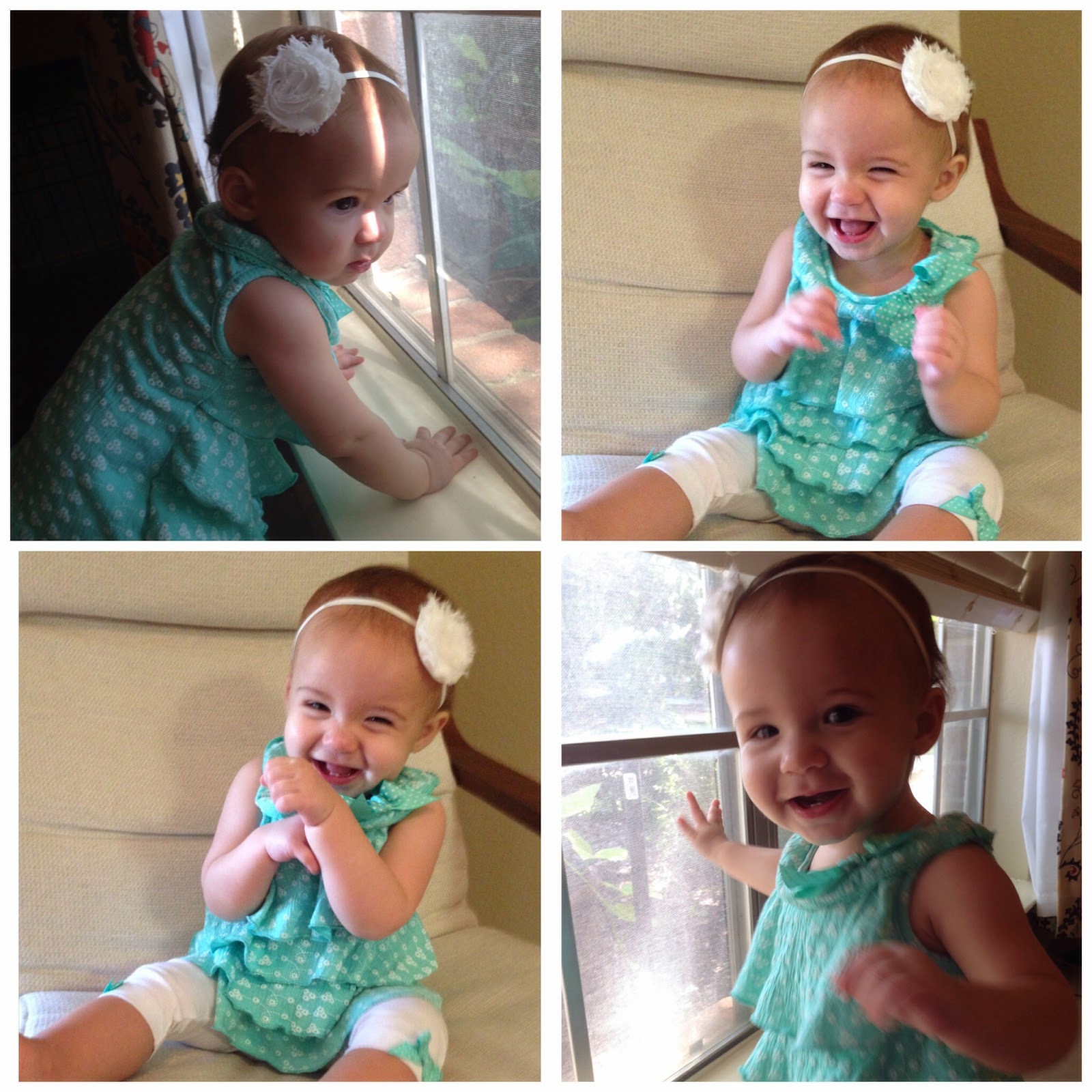 I can't believe our sweet girl is 10 months! It's been flying by. Joey and I are constantly surprised to find a little girl in the crib each morning instead of a little baby girl. She's too big! Ten months crept up on us, but a lot has happened during this time. She's so much fun!

Last month Claire decided that purees were for babies. Since that time we've been doing all finger foods. She loves chicken, turkey and steak and the girl can't get enough green beans. The green beans must be from a can, none of the fresher frozen variety. However, canned peas are out and frozen peas are in. It's trial and error around here. I have to limit her cheese intake as it disappears immediately from her tray. Her favorite fruits are mandarin oranges and pears. She also loves scrambled eggs. Oh, and she still doesn't like avocado. I do not understand this. It's the basis of guacamole!

We have also discovered that she loves dog food. Doesn't like avocados, but loves dog food. Oh, and beets. What the heck is that about? Beets are to be forced upon children, not welcomed! Again, I don't get it.

Well, we've officially lost the third cat nap (insert Mommy Dinner-Making Tears here). There are pluses and minuses to this development. It enables us to leave the house for as long as we need to after she wakes up from her afternoon nap and she goes to sleep right at 7:00 PM. The only negative is that she can get pretty tired around the old nap time, but refuses to close an eye. I'm sure she'll catch up to it soon. (please oh please!) She is still sleeping a solid 12 hours each night.

She took her first steps last week! She's only taken two at a time and then will crouch down, but she does this a few times each day. I'm thankful she's showing some timidity because she's been pretty kamikaze in the area of physical development.

She pulls up on everything and walks around with support from one hand. She will stand unsupported during these sessions for a minute at a time.

We think she may be a climber. She tests everything out for foot and hand holds like Cliffhanger. For instance, she pulls out the bottom of the oven and tries to climb up on it to reach the knobs. She will also try to climb anyone who's holding her. I'm a little concerned that the next step after walking will be running up a wall to do a back flip. I guess there are some positives: that would be YouTube gold and maybe we'd be on the Today Show...

Claire loves to dance. This may be because she watches So You Think You Can Dance with Mommy while drinking her bottles. She hears music and starts doing the Cute Baby Bouncing Up and Down Dance. So precious! Joey and I have also learned the moves to this dance so we can help encourage it. Baby dance choreography is tough.


She loves to knock down the towers of blocks that Mommy builds. She will cross a room to knock down a tower. It's core to her No Tower Left Standing mission. We will have to work on this before we play with older children. I could see this becoming a point of frustration.

This little girl loves to play with her Daddy. They're favorite game of late is Claire-o-saurus Rex. Daddy stands up and puts her right in front him like a mask and they turn into Claire-o-saurus Rex and stomp around the house sneaking up on people. It's a family favorite.

Lately she likes to crawl under things almost as much as she likes to climb. Claire is the queen of peek-a-boo and also loves to put things on her head or shoulders. Yesterday morning she spent half of it with a pair of pajama pants draped around her shoulders and gravitates toward accessories. She may have watched a few episodes of Project Runway with Mommy in the early stages of life.

Her favorite books are those with action items for the reader such as Sandra Boynton's Tickle Time or Ann Dewdney's Llama Llama Hop where Mommy tries to illustrate the action words while reading. She thinks this is hilarious. So does Claire.

She is obsessed with lights and ceiling fans. Her Grammy let her turn the lights on and off at her house and since then she's been hooked. I let her turn off the light in her room when it's time for bed. She loves this! Her obsession can appear creepy to the casual observer as she just stares at the ceiling every so often and raises her hand to it. (insert Twilight Zone music here) Ironically, 'Light' was my first word as a child and I'm wondering if she might choose it too.

Despite choosing stuffed animals over dolls, Claire is a people person. She loves being out. If she is in a fussy mood, we need to get out of the house. As long as there are people to watch, she's good to go. She will stare at someone and smile until they smile back. Sometimes I think to myself "Oh honey, that person looks like they may not be in the mood to smile.", but it never fails - they always smile back. She'll make you feel pretty good about yourself.

She's had the bottom two teeth since three months and has been working on the rest for a while. At her check up the pediatrician checked her mouth and said "Wow, she's going to have a mouthful of teeth in no time!" And sure enough, the upper tooth to the right of her middle tooth area is out. It's seems odd the order that they have come in, but oh well! We can see another bottom tooth and her upper middle teeth are on their way as well. I'll kind of miss her smile with only the two little bottom teeth though!

I feel like she's been sincerely testing me for the past two months and I go back and forth on what she understands about the word 'no'. These are the no-no's in our house: the fireplace, trash can, electronics, eating books, standing in the bath tub, getting into the dog food or chewing or his kennel, crawling into the dishwasher and pulling up the outer pieces of the play mat and chewing on them. This is typically the daily stuff.

I distract a lot, but it only goes so far and I want her to learn as we go. I'm pretty sure she does understand that she's not supposed to be doing some of these things. When she gets mad she will go straight for the books and chew on each one or she will rip up the edges of the play mat and chew on them. All while looking at me with a scowl on her face. I shudder to think about the teenage years. I don't know where she gets this strong willed trait from.

She is also showing more distinct signs of affection. She puts her head to yours or on you. It's her version of a hug or kiss. It's precious. She also shows affection toward her stuffed animals. She will crawl up to her bunny, monkey or frog and bury her face into them. How many times can I say "It's so precious" in a post?

A side note, we bought her first doll a few weeks ago and while she loves to play with her tiara, bow and the ruffles on her dress, she does not show any affection toward her. Princess Doll has been scooped and outnumbered by the native Stuffed Animal Posse.

Her sense of humor has definitely developed. Making funny faces always results in her little laugh. Equally entertaining is watching Mommy or Daddy yawn or sneeze. She cracks herself up as well. Usually this happens when she's talking to herself in the car or in her high chair like she's practicing her stand up routine and she'll just break out a funny face and laugh.

Have I mentioned that this girl is awesome? Each day is more fun and I can't wait for the Fall when we get to be outside more and don't even get me started on holiday fun! Oh and it's her birthday season too! I'm excited about it and sad about it all at same time. Love each new stage, but also a piece of me that wishes I could freeze time. I don't think Claire feels the same way. She's ready to go. So...we are too! Bring it on 11 months!
Posted by Jenny at 7:45 PM