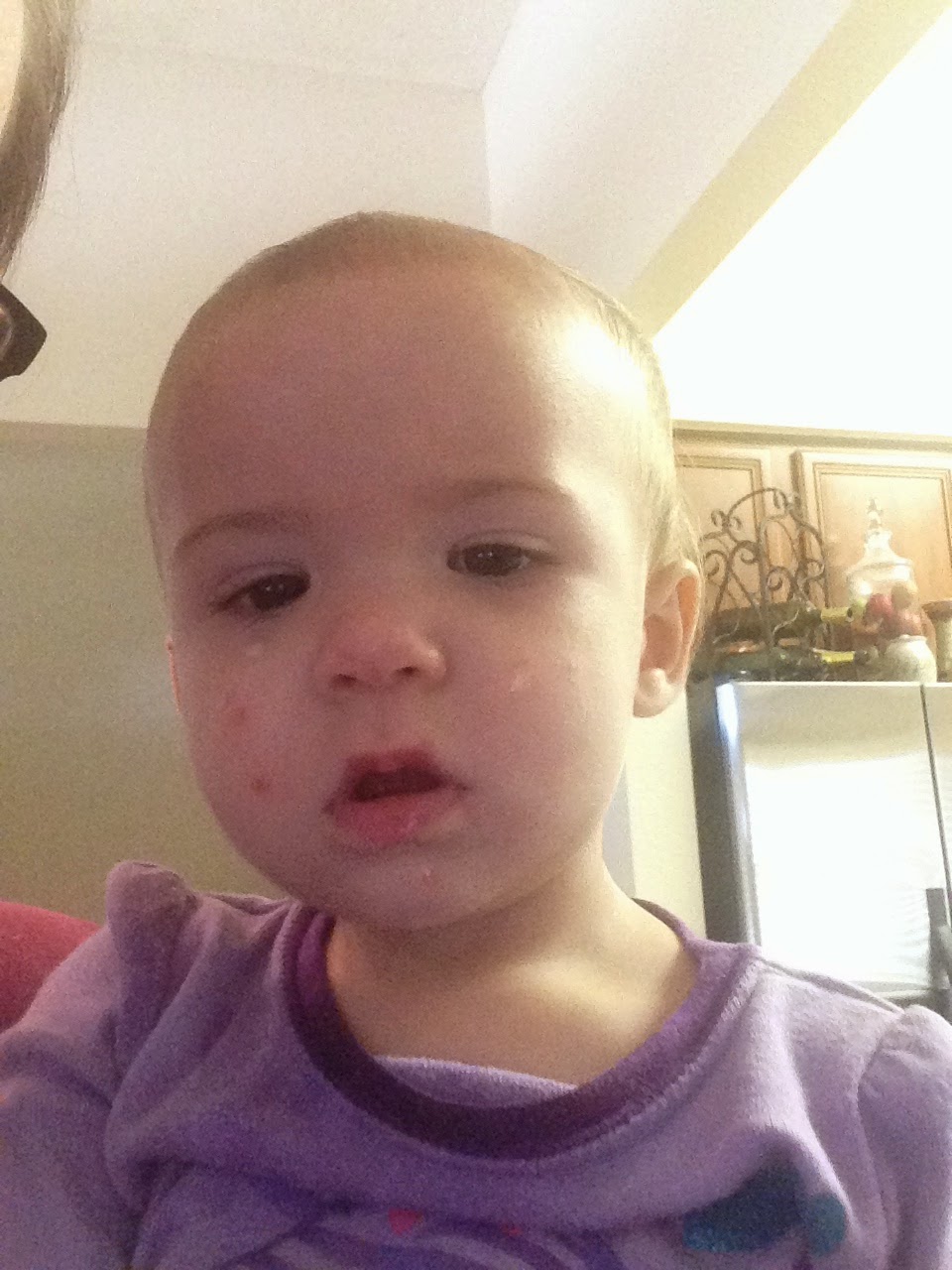 This picture pretty much sums up the last week. Lots of tears and lots of Mommy holding Baby.

We experienced our first real baby illness as well as our first after hours doctor visit this past week. Claire had Hand Foot and Mouth Virus. It's pretty much the equivalent of baby leprosy. We were in quarantine for a week.

Ok, so it's not baby leprosy and we didn't have to live in a cave wrapped up in cloths like lepers. You got me. It did however time itself to be when Joey was out of town for a few days (had to leave the day after she developed symptoms) and following two weeks of myself getting over strep throat and being in a quarantine of my own.

By the way, because the name of the virus grosses me out so much, I will be referring to it as 'HFM' from here to eternity or at least to the end of this post. What is it about the name that is just so nasty? It brings to mind images of the plagues in the Dark Ages or Mad Cow Disease.

Something that I have found absolutely funny is people's reaction. Ok, I don't remember anyone having HFM when I was young, but I have heard of several kids having it now. It seems many families of littles that I know have had it. A common response has been a horrified "Well, where in the world would she have gotten something like that?" (See? It's totally the name.) You would have thought it was Dengue Fever. Yup, we took Claire on a tour of the Amazon last week to pet the piranhas and we think that's probably where she picked it up. The library, people. I think we picked it up at library story time. But it's so contagious that it could just have been from the shopping cart at the grocery store. Who knows?

It all started last Monday with a little spot next to Claire's mouth, followed by another two or three spots within an hour or two. And then the real fun began. Blisters developed over her feet, legs, hands, arms and a few on her torso. We're talking dime-sized blisters. It should be called Hand, Foot, Face, Mouth, Leg, Arm and Somewhat All Over Virus. I would have had no idea what it was except that a friend of mine posted that her daughter had it on Facebook a few days prior to Claire showing symptoms.

I called our pediatrician and got an appointment for the next morning. The virus has to run its course so there really isn't anything you can do except bring the fever down. Our child is not really one to be still for long and isn't a snuggler, so when she laid in Joey's arms under a blanket with her lovie and then fell asleep, we knew she was not feeling well. 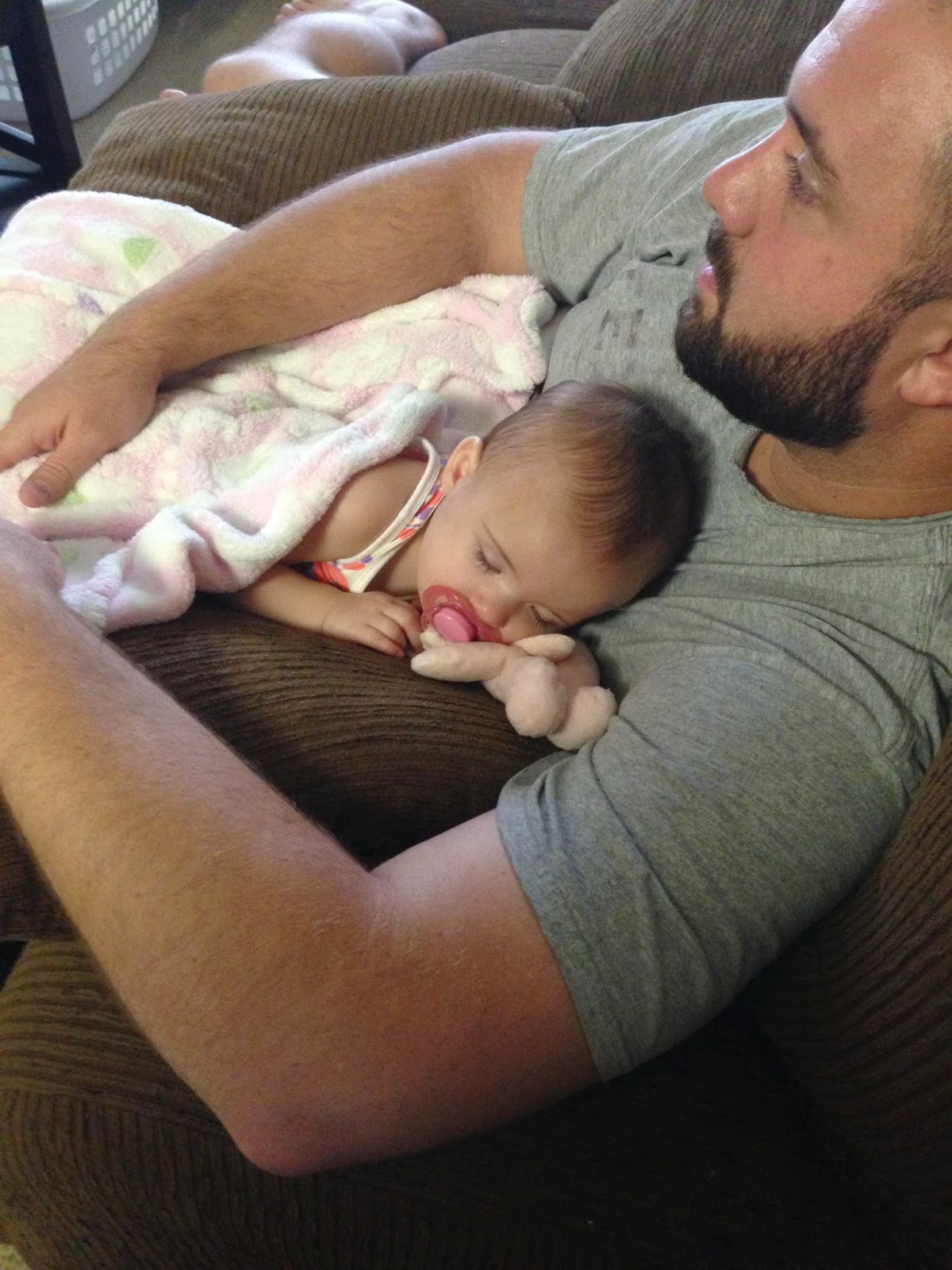 Sure enough, her fever had spiked to 104. Off to the after hours clinic we went. We received confirmation that it was HFM and also found out Claire still had an earache from the previous week. We also learned that after hours pediatric clinics can sound like child torture chambers. I seriously almost had to check on the kid next door and the other kid down the hall. What was going on in there?

Joey left the next morning and boy was he lucky. Things got rough. Word of advice, unless absolutely necessary do not Google 'HFM' and click on the images. I suppose these pictures are posted in online medical journals or something, but I didn't need to come across that in my GMS (General Mom Search). Unless you are that child's mother or nurse, nobody needs to see that. Honestly, what really got me was when someone told me that their child lost a toe nail. Anyone who knows me well, knows that losing a toe nail or finger nail is a perfect way to send me over the edge. Somebody get the smelling salts.

Anyway, the sad thing is that there isn't really anything you can do but sit it out and make sure they continue to drink their bottles and fluids. They get blisters down the throat so it can make the latter tough. Claire had a really bad case. She cried for about two days straight and refused food for three days. Poor baby. I had her in long sleeve pajamas and socks for an entire week and bathed her once in the morning with coconut oil and once more at night with Dr. Bronner's Soap. I was so paranoid about her blisters getting irritated and infected from crawling on the floor. Her little blistered body made me want to cry!

Once they are fever free for 24 hours they are supposedly not contagious, but who can take their child out and not be publicly shunned (see previous leper reference)? She looks like she's had the pox! Parents would have picked up their children and run from us. I would have. So we stayed inside for a full week for good measure. It took at least five days for Claire to return to normal behaviorally, although the blisters are still healing and peeling 11 days later.

Somewhere around Day 4 both she and I developed Cabin Fever. It's commonly found in both HFM child and caretaker. We looked out the front window a lot. Thank goodness the neighbors across the street were moving so we had some form of entertainment.

It was also during this time that I tried to develop a love for TV in my child. I know, bad and desperate parent moment. Up until this point, it's been a rare occasion that we have kid's shows on and I have made it a point not to sit her in front of the TV. But...

Nothing would make her happy because she felt so bad. I would hold her while she cried and she would want down. I would put her down and she would cling to my leg and cry with her hands up. This went on for at least two days. So I thought, what we need is some education on what you do when you're sick. You lay on the couch under a blanket snuggled up with Mommy watching cartoons. This is what all the other sick kids seem to do on Instagram. She wasn't having any of that. Ironically, I ended up finding comfort in Doc McStuffins and Little Bear myself so I just left it on. I needed to be reminded that there was a world out there. Even if it was a world where toys come alive and talking bears have fully furnished houses. (An aside, as much as I like Alaskan reality TV I would never make it secluded from civilization for more than a week. Obviously.)

I'm sure Joey was a bit alarmed when he returned from his business trip. His daughter was wearing mismatched pajamas and socks and looked like she had gotten into a bout with Tracker Jackers. But she did smell like coconut. His wife meanwhile was just shy of crazy having been on a steady diet of baby tears, blisters, oodles of laundry, work and Doc McStuffins overload. Thank goodness for my neighbor, Seresa, who braved plague exposure to bring this Momma a yummy dinner and let me see another adult face during the week!

Things are thankfully back to normal around here. Claire is still healing, but seems to be doing great! She is also taking four or five steps at a time. So much fun! We are excited to have been able to get out this week and be social. Ok, by social together we've really only gone to the grocery store and to lunch with Daddy. We are taking a break this week from the library and the Amazon just to be safe. Speaking of Amazon, do you think they make an inflatable bubble that I could put Claire in from now until she graduates college?

If you would like to add 'Claire not losing a toe nail' to your church's prayer list, this Momma would be forever grateful.