So It's Not Cool Whip? 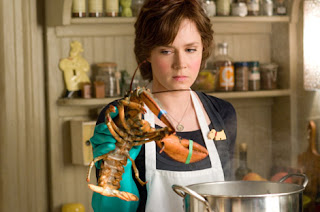 I don’t know what the deal is, but I am suddenly addicted to cooking. I am becoming a Foodie. I have to cook. Which is kind of crazy for me.

I religiously check my favorite food blogs. I try out a new recipe at least a few times each week. I am acquiring more spices than I know what to do with. I have made something that requires making a roux. I actually own a package of cheesecloth and have now used it. I’ve found the occasion to use peppercorns for goodness sake. Peppercorns. Twice!

Often when working out I watch the Food Network on my little personal TV screen at the gym and sweat to Paula making fried chicken and mashed potatoes. I find it ironic that I’m most likely at the gym to work off the very sort of thing that Paula and the Neelys are making. And then I go home and wonder why I want to eat everything delicious under the sun. It’s a vicious cycle, I tell you.

I spend way too much time in the grocery store looking for items that I didn’t know existed before seeing them on an ingredient list.

I usually am reduced to finding an elderly woman who looks like she knows what she’s doing what’s up in the kitchen to ask my dumb questions. She just looks at me with pity, calls me ‘sweetie’ and pats my hand while directing me to the appropriate product. It’s OK, I don’t mind.

What the heck is it with ‘whipped’ cream and ‘whipping’ cream. They shouldn’t use this terminology. For the love of everything holy, if it’s whipped cream just call it Cool Whip to differentiate it from whipping cream.

Joey has both benefited and suffered from my latest addiction. I have to say, for the most part things have turned out well taste-wise. And by that, I mean I haven’t burnt anything beyond recognition.

However, I have a serious problem with timing.

My timing issues usually belong in one of two camps

1. I make a lot of mistakes and have to redo stuff
2. I’ve forgotten all metric conversion rates that I learned in elementary school and constantly have to Google them.

I’ll tell Joey, “It’ll be ready in about 30 minutes.” and thirty minutes later...”oops I forgot to get this thing going, it’s going to be another 15 minutes.”. And then an hour later when we have filled up on snacks that were originally to tide us over until dinner, we sit down to eat at eight or nine. Like I said, my timing’s not the best but at least it’s almost worth the wait.

My favorite food blog is www.thepioneerwoman.com. I have made numerous recipes from her site and they’ve all been really good. Plus, she includes step by step pictures which is helpful for beginners like myself. I could seriously cook everything on her site.

All this to say, you may see more food on this blog in the future. Just because it’s on my mind lately.
Posted by Jenny at 12:25 PM