My phone broke. For two weeks. Well ok so it wasn't broken-broken, but when you lose all of your contacts it might as well be. Who knows anyone's number these days? I couldn't even call Joey if pressed for a number!

This weekend Joey and I finally went to T-Mobile to see what was up. An entire hour of my life spent on a hard chair watching Saul, my T-Mobile consultant, draw his name in block letters while on the phone with support. Side note: I was slightly jealous of his block letters because they were pretty good. I always wished I could draw good block letters, sigh...

Anyway, back to the point of this post, which is my husband. My husband is memorable. Unlike me, who blends in with all the other tall girls with brown hair, my husband stands out in a crowd. He would not be a good Where's Waldo prototype - too easy to spot. How many guys do you know that are 6'4, dark eyes, dark hair, muscular (if I don't say so myself - he's going to kill me for saying this by the way - hush don't tell, just between you and me) with a beard? The beard really does it. And he's a big guy.

Another aside, when Joey and I were dating my Mom asked me what he looked like and I told her that Joey was a "big guy". Up until the day that she met him, Mom was always really sensitive around me because apparently she thought I was dating someone who was really overweight. I should have qualified the statement "big guy".

I am used to blending into the crowd and get the statement "Don't I know you from somewhere?" quite often. Yes, you do. You probably met another tall girl with brown hair yesterday. I'm ok with this and used to it. As long as I'm not being compared to Martha Hooch, I'm ok. Now Joey on the other hand, is not used to being compared to other people which is why I got really really tickled this weekend and well, one time before.

When we walked into the T-Mobile store Saul immediately exclaimed "Wow! You look just like Jesse James! You know, Sandra Bullock's husband? Has anyone ever told you that before?" I think the word "gush" could accurately identify the block letter artiste's reaction. And of course no, Joey has never been told that he looks like Jesse James. Hmm...maybe minus the tattoos I can see a resemblance. 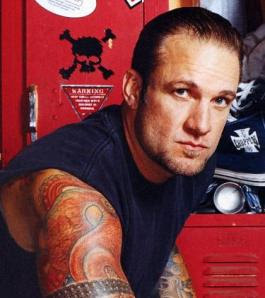 The only other time Joey has ever been compared to anyone else was during Halloween. It was Joey's turn to answer the door and pass out the candy. He opened the door to a group of thirteen year old girls. One of the girls said "Woah. You look like Leonidas. And that is NOT a bad thing." And that's when I stepped in and said "Look, chick back off. Get your own Leonidas." Ok, I really didn't say that. I heard it in the other room and died laughing. I didn't even know who Leonidas was. So I googled him and you know what? I can totally see it! I would be scared if Joey made that face too! Geez! 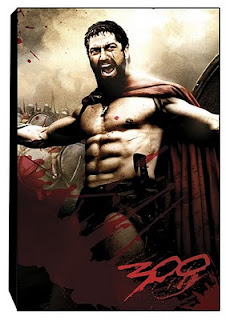 I don't think Joey likes being compared to Jesse James or Leonidas especially by a guy or a thirteen year old girl. But they got it right. My hubby's rugged and manly. And I like it. I just know he will always fight for and protect me. That's one of the best feelings: being taking care of.

Oh and one thing I have on Joey. He could never be an FBI or CIA agent. He couldn't blend in. He'll have to leave the spy business up to me.
Posted by Jenny at 6:17 PM