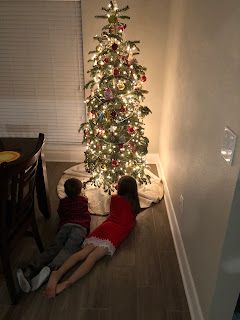 It felt right to be in our little home for Christmas. Kids waking up to presents under the tree in the dining room. Reading the Luke account of Jesus' birth in the living room. Christmas breakfast and dinner around our table. Playing with new toys and games and reading books on the rug together.

Claire has always been a Santa Skeptic. In fact, last year she tricked us. She declared that she didn't believe in Santa and we thought, well there you go. No need to worry about Santa. Then on Christmas Eve at about 11 PM on the drive back to Houston from Louisiana she woke up briefly in the carseat and said something like "I can't wait to see what Santa brings tomorrow." Joey and I both looked at each other in a panic. I think I found some random items at the rent house at midnight that qualified as potential Santa gifts the next morning. This year she goes back and forth. Doesn't really think he's real and then goes through all the logical reasons why he doesn't exist while giving us the side eye.

Keats believes with all his little heart. He defends Santa vehemently against his sister's anti-Santa points.

His strong belief is precious. And also funny, because we really don't "do" the Santa thing. What they know about Santa comes from Christmas movies like the Santa Clause, Rudolph the Red Nosed Reindeer and snippets of Elf. Oh and the big one. He saw him in the flesh at the Mall. Joey told me that Keats tugged on his arm and said "Dad, look! It's Santa!" He was in complete awe. So for this reason, we followed Keats' lead on Christmas Eve night because he was so excited about it. He insisted we put out milk and cookies for Santa. Did you know that Santa likes vegan sugar cookies? He doesn't like almond milk though. He may have poured that one down the sink just to be kind. 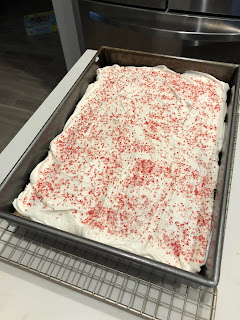 We also made a Happy Birthday Jesus cake vegan style. Was it healthy? Nope, just no animal products. I used vegan butter for the first time. Did you know that that's a thing? Yup. Vegan butter, it exists. More real than Santa. We talked about the meaning of Christmas and and the kids and I ate cake. I'm pretty sure I ate half the cake one fork sized centimeter sliver at a time over the holiday.

The next morning, two unwrapped gifts were in bags with their names on it and both kids were Santa fans for at least an hour or so before Claire started to question the Santa fundamentals again. Keats asked me if we could ask Santa to come back again that night.

On the plant based eating front, holidays have been interesting. Joey is now finished with his raw vegan 28 day cleanse. He finished it a week or two after Thanksgiving. I'll share more about this at some point, but in summation...he rocked it. Didn't cheat once, not even on Thanksgiving and it is one of the strictest eating plans I've ever seen. For holidays we have decided that it is worth a "cheat day", but cheating looks really different. For us, it may mean that a little oil is in some of the dishes as we do not cook with oil at home. Or it may mean whole wheat flour or sugar may be in the food. But it's all still vegan even if it's a cheat.

Since we were going to be in our home for Christmas, I wanted to try a few plant based holiday dishes. Was it good? Yup, pretty good for the most part! Was I exhausted and did I cook all day? Also, a big fat yes. 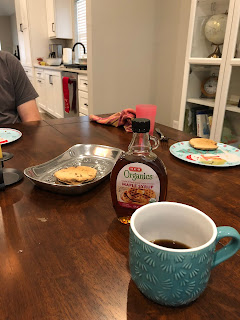 For breakfast I made chocolate chip pancakes. Had to meet the following standards: high quality whole grain flour and no eggs, oil or butter. I know, it sounds like a sad pancake but truly they were a great treat. This was Joey's first baked good since October.

Christmas lunch turned into Christmas dinner. It became quite the undertaking. Between four burners, two oven racks, a blender, food processor and an Instant Pot, I still had trouble juggling all the cooking times. We had lentils, quinoa, Mac and "cheese", green bean casserole and sweet potato casserole. We were supposed to have a green salad, but I was done. Plant based cooking isn't necessarily hard, it's just different and standard cooking techniques don't always apply. Instead of using an egg, you may need to make a "flax egg" which means that once again I have to Google "how to make a flax egg". Google and I are close friends and we have 100 conversations going on at a time (which is probably killing my battery life, but ironically could be extending my real life....hmm).

By the time dinner was on the table I looked and felt like the crew from Apollo 13 following re-entry. However the ground crew wasn't quite getting the message. Someone get this lady a chair. And some water.

But it was finished and on the table. 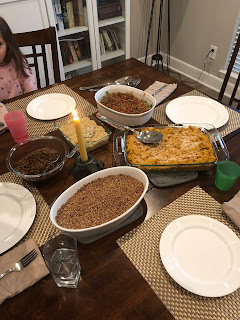 The biggest hit was the sweet potato casserole. My kids are still asking for it. It had maple sugar in it, so not surprising! The only outlier was the Mac and cheese. I used chickpea flour noodles and I'm not a huge fan of their flavor.