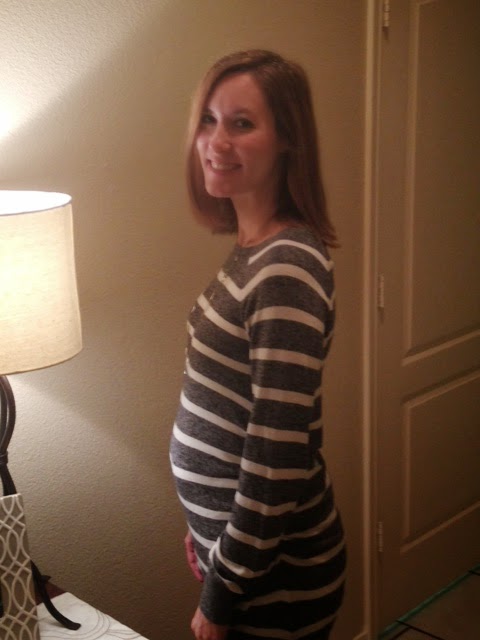 I was never very good at posting updates about my pregnancy with Claire and I really wished I would have looking back. To add, I've posted a general family update and a 13 month update for Claire so why not throw another update in there so we'll be all up to speed? It feels like the right thing to do.

I'm not sure what size he or she is in terms of a fruit or vegetable (my app updates tomorrow), but the baby is weighing 3-5 ounces and is 4-5 inches long at this point. Last week we were at the size of a naval orange, so think a little bigger. He or she can hear us now, is developing facial muscles and visual perception. Isn't it amazing?

"So I guess I'm really pregnant." That's what I told Joey when the bump finally started to look more bump-like. He said "The three ultrasounds you've had showing a moving baby haven't been convincing enough?" Well of course! The first time you hear that heart beat and see that little baby bouncing around on the screen it hits you that you have a tiny human growing inside you (By the way, how crazy is that?). But you know what I mean, once you start to get that round belly it gets real. And the belly is here. It still could be mistaken for a beer belly, but at least it's a more defined beer belly. I think I'm showing earlier than I did with Claire.

I'm wearing both maternity and regular clothes, but I can see that a full transition is on the nearing horizon as in tomorrow...or after meals.

I'm through the first trimester so I'm also for the most part over the nausea and extreme fatigue. I regressed a little this past week, but I'm hoping I've hit another upswing. The nausea and fatigue were both worse than I remember with Claire, although it could just be that I'm chasing a one year old all day so there's a little something extra thrown in there.

I'm also just getting over pregnancy related allergies. Yes, this does exist. Fun fact of the day. It has to do with fluctuations in your hormones and you can have allergy onset during puberty, pregnancy and menopause. I had horrible allergies/asthma with Claire for about a month and a half and have experienced the exact same thing with this pregnancy. I wake up several times in the night unable to catch my breath and dry cough and gasp for air for several minutes. It freaks both myself and Joey out. It can also happen in the evening such as when I had an attack during Small Group and had to reassure everyone that I did not have Ebola. For the most part it's when I'm trying to sleep. Changing positions doesn't seem to help. It's gotten a lot better the past week so I'm hoping I'm almost finished with this phase.

My moods are returning to normal as well. I had flat emotions during my first trimester with Claire and experienced the same thing with this pregnancy. It's such a weird symptom because you have everything to be excited about, but you're just blah. I don't think I'm an extremely moody person normally (Joey may disagree) and it stinks to feel that way. Meditating on truth from God's word has really helped to say, you know this may be what I'm feeling, but THIS is what is true. Anyway, it's on its way out right now and I am thankful! Hormones. Sheesh.

I didn't have any major cravings during Claire's pregnancy, more like leanings toward certain foods. Potatoes were my food of choice with Claire and with the second pregnancy as well. I could eat a loaded baked potato for every meal and be perfectly content. During the first trimester there were a lot of foods that I didn't want such as Chinese food, meat and especially bacon (!). There was a lot that just didn't sound good to me. With the exception of meat, almost everything sounds ok now. Oh, and I like bacon again. Maybe a little too much. I didn't consider bacon in the meat category. Vegetarians can't turn down bacon, right?

I'm feeling little movements now and then, usually at night. I think I started feeling flutters around 13 weeks.

Both Joey and I feel like it's a girl, but what do we know? The only thing I have to go on is that everything is exactly how it was with Claire's pregnancy.

This week I get tested for gestational diabetes. I was diagnosed during the last pregnancy at about 25 weeks so this time they'll start testing at 16 weeks. If I pass the 16 week test, they'll test me again at 24-25 weeks. Up until the 23-24 week mark, Claire's pregnancy had been for the most part cake. The diabetes was a game changer. Several other symptoms began to appear about a week or two prior to the diagnosis that I now know were related to the diabetes.

Gestational diabetes seems to be different for everyone. Some have to go on insulin right away and others can get away with all kinds of stuff. People also have different food triggers. I was in that hard to manage category, but I was able to stay off the insulin. I was very strict on the diet and actually had to be more strict than the recommended diabetes diet to keep my levels in an ok spot. It's also more than just a healthy eating thing. You have to eat so many carbs paired with a certain amount of protein. You have to eat meals and snacks at certain times throughout the day. You have to test for ketones once in the morning and test your blood four times a day and record all that plus everything you put in your mouth. In my case and especially toward the end, I had to walk for at least 20-30 minutes, 30 minutes following meals to keep my sugars down. This was all foreign to me and very overwhelming. Again, some can get away without following the system strictly, but I could not. Felt like a full time job and I already had one of those. And like I mentioned, there were other symptoms that came with it. Thankfully, I was able to stay off insulin and Claire was born at a normal weight ten days early without having complications or having to be induced.

So...needless to say, I don't want it again! But...the odds are high. But...not impossible that you may not have it on a subsequent pregnancy. I've heard of several people who didn't have it with their next child and I'm hoping this will be me. The silver lining is that I very well may get to have a diabetes free Thanksgiving if I pass this test and the next test may be the week following Christmas. Skirting this around the holidays would be awesome. If it does happen, well, at least I'll know what to do and hopefully it won't be as overwhelming. And of course, a positive would be that I won't gain as much weight if I'm on the diabetes diet from 16 weeks and on. I'm all the about the silver lining.

Things are definitely moving a lot faster with this pregnancy. I think this has to do with having Claire to keep us preoccupied. With Claire it felt like getting to the point of 20 weeks to find out the gender took forever. Now, we're both thinking it's only a month away! I'm hoping we get to find out the week before Christmas.

Tomorrow we get to hear our little one's heartbeat again! Yay!