9 Months and Some Change Update

I haven't updated since she turned six months. Ouch. Maybe this is because I have spent every day since then chasing this little ball of lightening around the house. She started crawling right about that time. She started speed crawling at six months and three days. We're now in warp speed mode. I'm estimating that I bend over to pick her up and re-route her from danger at least 432 times a day. There is a good chance I will look like Quasi Moto within a few more weeks at this pace.

Here's the 9 month and some change update:

We are just finished with a phase where we didn't like to stop to eat because that means you have to stay in one place. Thankfully we have moved on and are back to a normal appetite.

We are making the transition from purees to soft solids. I had fun getting creative in making her purees, but this solid food stuff is just as fun. Her favorite foods are yogurt mixed with fruit puree, green beans, grapes, mozarella cheese, butter beans and chicken. We just tried banana pancakes (banana/egg pancake) this morning. It was a new flavor and texture so she was a little unsure. We are going very slowly on grains so the only one that she has been introduced to thus far is quinoa. Oatmeal will probably be next on the list.

She still takes three naps a day. I think we're about to drop the early evening catnap though. Oy.

As mentioned, this girl is constantly going. She crawls everywhere. I will say that she has slowed her walking desire now that she's able to speed crawl. Although she pulls up on everything. She climbs on top of laundry baskets, through and over chair rungs and will completely bulldoze over myself or Joey if we're on the floor in her path.

Diaper changes have also become a battle as she goes into an alligator death spiral when anyone attempts it.We found a magic plastic coat hanger would do the preoccupying trick for about two weeks, but we're now over it. I'm physically worn out after each diaper change.

She will also stand for about 30 seconds or so. She's had some pretty rough tumbles and has become more timid with each fall. She also likes to walk with help.

She claps! She loves it. We love it. There is a lot of clapping in our house.

She dances. Or we think it's dancing. She bounces up and down and gets very excited - especially when music is playing.

I love watching her play. She sings to herself while she plays with toys or explores. It's so sweet. She loves her piano and and her new push walker toy. Her favorites are always unconventional toys, meaning things that aren't toys at all like spaghetti scoops, Gatorade bottles and Tupperware.

Books are still fascinating. I'm afraid I say "Books are for reading, not eating" about 500 times a day. She opens them, looks at the pictures, looks at me and then into the slobbery mouth they go. She loves books with animals and also those that have touch and feel textures.

She loves to watch our dogs. She'll stand at their kennel doors with hands on the gates and just smiles. Between the three of them there is a lot of drool in our house. 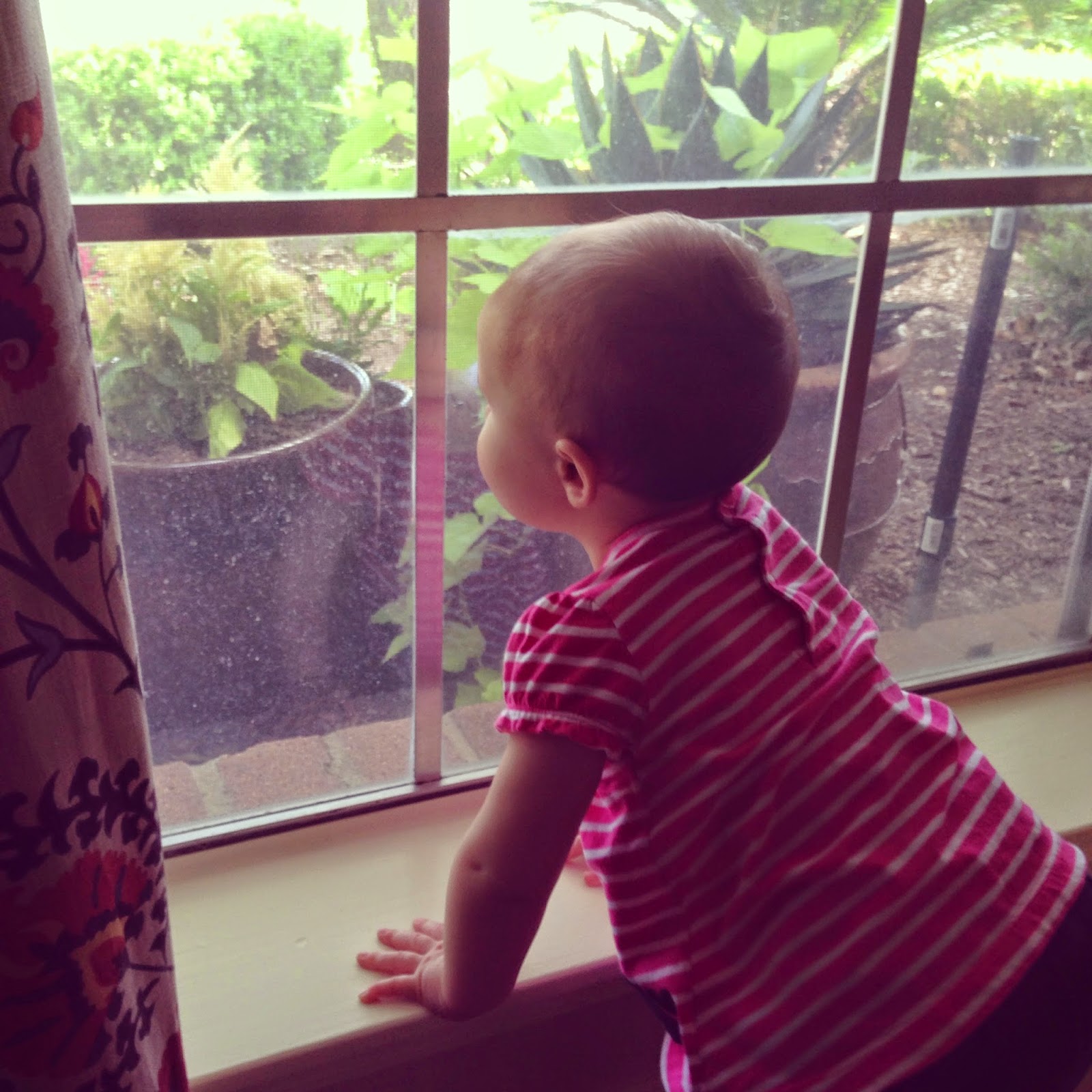 Looking out the window is a favorite pastime. She watches the birds, neighbors and looks for her Daddy to pull in the driveway.

We've gotten into this habit of showing her videos of other kids from Facebook and Instagram. She laughs and smiles. She also happens to love videos of herself. Hence why we started showing her that she's not the only kid who has videos.

Claire loves going on walks around the neighborhood and meeting new people. A new favorite is going to the library for story time. We read books, sing nursery rhymes, play with new toys and meet lots of new babies. Claire pretty much ignores me the whole time and finds new people to play with and toys to chew on. I don't take it personally. She definitely isn't timid when it comes to meeting new people.

She's had the bottom two teeth for several months, but just this past week we have noticed that two top teeth are coming through! It's no wonder. It think the slobber to tooth ratio is 32 liters to 1 tooth. She's like a little slug leaving a trail! A sweet little slug though!

We've also noticed that she is picking up on the meaning of our words. When we ask her if she wants to read books she actually looks to her books. Same thing with asking her if she wants a bottle. She immediately becomes fussy and looks at the counter where we mix it all up.

She says 'mama' and 'dada', but we're not sure she associates with us. We don't care, we love it anyway! She also makes many other repetitive syllables and loves to talk to herself. I thinks she's fascinated that she can open her mouth and make sounds.

I know I've said it before, but so far this is the most fun stage! She shows us a new smile or expression nearly every day. She is just so precious and each day we are more thankful for her.
Posted by Jenny at 11:05 AM