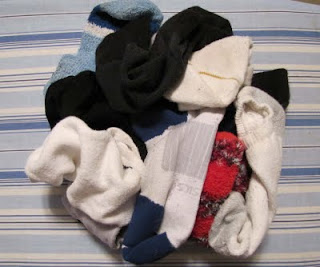 Along with absolutely wonderful characteristics we discover about our spouses as newlyweds, there are also those little things that we uncover that, well - get under our skin. You know what I'm talking about - The Peeves. Maybe it's leaving the dirty clothes out of the hamper or the toilet seat up, but we all have certain little self-imposed guidelines for the other half's behavior.

For instance, I know a few things that Joey is particular about: wiping down the shower doors, my long hair in his hair brush tickling his face, shirts facing a certain way in his closet, me taking his good pens, etc. I try to do my best in these little areas as he does the same for me.

And then there's losing socks in the dryer.

This has long been a point of contention between us. By long, I mean almost 3 years. And by contention I'm slightly exaggerating, but what's new? Let's just say that it has caused some frustration for my hubs.

Now, my argument was that if one would not leave socks balled up in shoes, kicked under the bed or in exotic locations across the landscape of our house, one would not have this problem.

That was my case.

But then I started noticing that his socks were missing too. I would load everything into the washer, meticulously noting all the socks as they went in. And low and behold, by the time it came to folding they were Sock Singletons!

So, what does a new wife do? She stores all the Sock Singletons in the back of her own sock drawer for safe keeping. Just until they are reunited with their true love of course. No need to stress you know who out about the dwindling sock population in our house. Or confirm his idea that I lose socks for that matter.

I was perplexed. I mean, I had heard rumors of the Sock Monster, but didn't really believe in it's existence. It's the housewife's Chupacabra or Nessie. But how else do you explain this?

I began to feel bad when putting little sock couples into our washing machine, knowing that the odds weren't in their favor. I gave the Sock Pre-Wash Address to all those about to embark on their first cycle. Look to your left. Now look to your right. Only two of you will make it out. And odds are, both of you will be Sock Singletons.
Laundry Life went on like this for quite some time. Our poor socks were shaking in our boots.

Anytime socks were brought up in conversation, I immediately broke out in a sweat. Did he notice? Thank goodness for replenishment during Christmas from his mom. I mean, at some point you just run out of matched socks.

I can't quite remember if the hubs began to notice that his sock levels were beginning to reach alarmingly low levels or maybe we were just folding laundry, but it finally came up.

He said something about how funny it was that we could never keep matched pairs of socks.

Mmmm hmmm, I said, so funny. Insert nervous laughter. It's over, I thought.

The hubs continued, saying that it had gotten so bad that he had...

This is it. My days of sock trafficking are over. The jig's up.

Wait what did he just say?

He said, it's gotten so bad that he started collecting stray socks and keeping them in the back of his drawer in hopes of coming across their match.

Yes, we were both sockpiling. You just have to laugh.

I immediately started a Match.com for socks. Over 25+ matches made!

Moral of the story? Don't keep secrets from your husband. Even if they're little ones.

Oh, and never dispose of Sock Singletons. You never know when their mate could be one sock drawer over.
Posted by Jenny at 7:00 AM