Joy to the World

But first, a few things I want to share with you about my family.

My Mom and Dad were different. Of course, by default and as a family - we were different. And that meant, that much to my dismay I was different. I mean gosh, we were already a large homeschool family which at the time was the epitome of weird and then you throw in this? It's only inevitabe.

What do I mean by this?

My parents lived by Joshua 24:15, "But as for me and my house, we will serve the Lord." That meant that EVERYTHING was different.

The "But" implies the difference. While everyone else lives for that, we're going to live for this.

My parents met in college in the late 70's. The quirky music major fell for the pretty and popular art major. (Mom says she wasn't popular, but I don't think this is true. I've seen her in her yearbooks. And I've seen the other people in mine.) They married in 1979, toward the end of a Christan revival that swept across the nation as part of the counterculture hippie movement and changed the contemporary view of the church. One of the things that came out of this movement was contemporary Christian music. I'll get back to this.

Growing up, my Dad moonlighted as a part-time youth minister at our church and sometimes worship leader.

We were in church A LOT. For many, church may have began and ended on Sunday, but not so for the Hanks' family. Mom and Dad let us know that this was a time for worship, not Jenny's social hour.

They made the at the time unpopular decision to homeschool myself and three younger siblings because they wanted to be able to teach us about Biblical truths.

We prayed together and had evening family devotionals. It was quite normal to find my parents reading their Bibles at the kitchen table. If my sister and I got in a fight Mom would throw out things like Matthew 5:9 in a gentle voice "Blessed are the peacemakers, for they shall be called sons of God." Well, great. You can't argue with the Bible. I mean, what do you with that? The funny thing is that she would turn this on my Dad when he was stirring up trouble among us kids. The gentle voice then said "Fathers do not provoke your children to wrath..." Ephesians 6:4. This is really funny to me now. My Mom was wise.
You may think this is crazy, but it's true - I have never heard a curse word come out of my parents' mouths. There were a lot of TV shows we were not allowed to watch, music we couldn't listen to, attitudes we were forbidden to have and skirts I was not allowed to wear. And do not even think about asking to spending the night at a friend's house the night before Sunday. Mute point.

These were things that in the mind of an already awkward teenager, made us weird.

These are the things that to the outside world may seem restrictive. But may I say this? The thing that I remember most from my childhood was joy. My parents had joy. Joy in the hope of Christ.

I also remember music. My Mom and Dad both played guitar and sang worship songs often growing up. Our house was filled with music, but music with a purpose. We listened to KSBJ before it was cool. My parents favorite artists at the time consisted of Keith Green, Second Chapter of Acts, Sandi Patty, Amy Grant and Michael Card. At least that's what I remember. In particular the song that characterizes the memories from my childhood is the Easter Song by Keith Green.

The video below is of Keith Green live, although I encourage you to listen to the actual record track because it's pretty amazing with strings added, I wanted to show you his heart. I would turn over the back cover of my parents' Keith Green record album to read Keith's story. There was a picture of Keith and his family on the back cover. Not too long after this video was made, Keith and two of his children perished in a plane crash. As you listen to Keith, don't be sad because I think he's alright! Death has lost its sting for those who believe. I have to remind myself of that.
Get past the 70's hair and take a listen to the simple lyrics. This is the hope we have in Christ. This is our joy.

This joy is what makes us as Christians different. It is beyond just actions - it is the joy that gives birth to the choices we make.

And as I woke with joy on Good Friday of not only thinking of the cross, but the resurrection that followed, I am so grateful to my parents chose to not live like that, but like this. Isn't great to be set apart for Christ? Isn't it great to be different?


The day is almost finished. I'm yoga'd, showered, read and prayed up. And now, I'm feeling reflective and quiet.

And looking at yoga mats to purchase.

I know, I'm really getting into this yoga thing. Maybe it's because I can touch my toes for the first time since 8th grade. I did this accidentally when I was telling Joey how much I was improving. I said look what I can do! And much to my surprise and his, I touch the floor with straight legs. I was quite impressed with myself to be quite honest! Now of course let me add a disclaimer - this was just after yoga class so please know that if you ask me to demonstrate my moves, you may not always get this result.

This is the mat that Melissa, my favorite teacher, recommends: 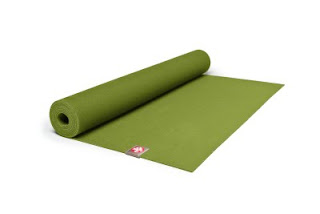 This is Manduka's eKO Lite Mat. I'm hoping that with this mat I can do this: 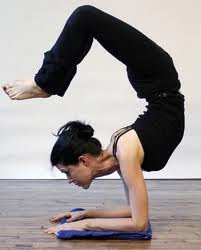 But there's a good chance I'll still be doing a lot of this: 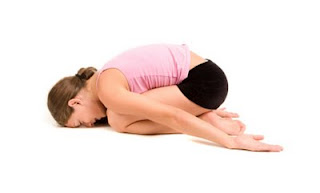 Sister Act, Otherwise Known As Stay Away From My Barbies 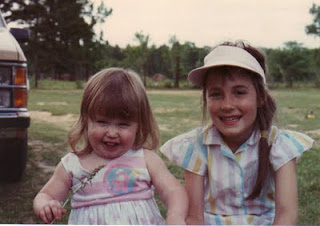 How can anyone in their right mind think that mint and chocolate are not MFEO?

My sister, JoAnna, that's who.

And that she loves Lady Gaga. And I think that wearing dead meat as a dress is grounds for detracting musical points.

If you knew us both, you would know that this makes sense.

She has pretty feet. I have two very crooked toes that make me self-conscious during sandal season.

She has a love for dark poetry that as a pre-teen was slightly alarming, but much to our relief it is just a hobby.

She used to give my Barbies haircuts. That made me mad. Then she decided to cut her own hair. That made my Mom mad.

She loves ecclectic music and may be able to sing the Evita soundtrack from memory.

She carved our brother's name into stuff all the time. Only problem was that was that he wasn't old enough to write. Classic mistake.

I'm jealous of the freckles across her nose.

And the natural honey highlights in her hair.

One thing we both have in common is that we love to write. She has recently been given the privilege of writing articles for the local newspaper and I couldn't be more proud. I just ask that she not mention my crooked toes.

We celebrated my sister this weekend and her birthday. I am so thankful to have her as a sister and a friend. Love you, Jo!

Are you as excited about the weekend as I am?

Apparently, my co-workers know how much I am looking forward to this weekend as they played me for the fool this morning. They sent me the most serious email ever explaining that a crazy situation had come up and I would have to make an out-of-town trip to San Antonio for the weekend.

And I completely fell for it. Like a dork.

I wish I could say that I had totally forgoten that it was April Fool's Day, but we had talked about it the day before and then a million times this morning.

April Fool's! Just kidding, I mean who would be so gullible to fall for this joke! A sucka, that's who!