Joey and I are in love with Sweet Leaf Tea. Oh my goodness it's so good! The peach is our favorite, but gosh the lemonade tea is pretty heavenly too. It's all natural with cane sugar so that's a plus and the bottles are glass so it's not sitting around in a truck in the hot sun absorbing the plastic. Anyway, just thought I would share!
Posted by Jenny at 8:10 PM No comments:

It's All Greek To Me

This past week, I was on a charter bus for several hours with 32 strangers for reasons that are not going to be addressed in this blog due to the sheer length that it would take to explain.

Across the aisle was a Greek gentleman in his late 50s. I won't use his real name because it is quite unique, but it was about as decidedly Greek as Apollo or Odysseus. Apollo, as I will call him, had only been in the States for the past few months and his English was broken. He was from Athens visiting his sons. It took a lot to establish these facts as his English vocabulary and my Greek vocabulary were very slight. Ok, so I really have little Greek vocabulary except for words like kalamata, feta, gyros, and Zeus, but the point is our communication took a lot of hand motions and the sounding out of words.

Shortly into our conversation and after Apollo told me his wife was in Athens, he pointedly asked me if I was "mah-reed". I held up my ring finger to make a big point of my ring and said that I was happily mah-reed. Oh, he said and added again that he had two sons and that they are doctors. He asked me my name and after saying it slowly a few times he exclaimed "Jee-nee, from Jee-nee-fur, Ah! Like Jee-nee-fur Ah-nee-ston.!" Oh yes, I said like Jennifer Aniston. "You know that Jee-nee-fur Ah-nee-ston's father was a Grrr-eek?!" Wait, am I in a scene from my Big Fat Greek Wedding? And true to form, throughout the conversation Apollo brought everything back to being a Greek. They weren't kidding with the movie.

He was Greek Orthodox and said that they had just finished having a huge celebration for Easter by roasting large amounts of meat. He said this while balling up his fist and rotating it, by which communicating to me that they do this on large rotisseries. Visions of large animals rotating over huge bonfires came to mind. Again he said, "You mah-reed? You know I have two sons..." And again, I gave him the finger, for clarification's sake, the Yes-I-Am-Married-Finger. He told me he had married his wife when he was 16 and she was 13. What? No wonder he's trying to marry his sons off! They were probably considered male versions of old maids at 20!

As our trip was wrapping up, Apollos asked me when I was coming to visit in Athens. I laughed and said I would absolutely love to go to Greece. He just smiled and said "Well, when you come?" He was serious. Ummm, I don't know, that's a big trip. At that point he wrote down his cell and house humbers and his name and said "When you want come to Greece, you call me." Oh ok, I'll have to talk it over with my hus-bannd. "Yes, you can meet my wife and my sons!" As we parted ways, I laughed just thinking about if Joey and I showed up on this man's doorstep in Greece. Would they really have welcomed us? I feel most certain they would. They would probably roast a few large chunks of meat on the the spitfire and we would all be dancing that Greek dance that they do while drinking ouzo and yelling "Opa!" Mulling this over, I decided to keep the number, just in case Joey and I are ever in the Grecian neighborhood...

For the last three years I have not been much of a TV watcher. My last roommate and I never even hooked up our TV except to watch an occasional movie. Before this Sans-TV Era, I was an avid watcher and followed several shows. I could hold a conversation about the most popular plots with Entertainment Tonight like ease. Today, I am totally lost. Yes, I have been out the loop for the past three years, but I have actually tried to watch TV since Joey and I married - at which point I consequently became the joint owner of a TV - and I have discovered something about TV that has changed during the last 3 years. There's nothing on!!! After surfing 9000 channels, Joey and I find ourselves watching reruns of Friends, Seinfeld, Everybody Loves Raymond, etc. Last night, I had this epiphany that I have whizzed all the way to 2009 to watch Andy Griffith, a show made 30+ years ago. And this is not just because I was raised on Nick at Nite, but TV just isn't what it used to be. I am sure there are some gems out there, some of which I would mention are The Office and 30 Rock for me, but overall, TV these days stinks. Maybe it's for the best. They say that TV is just a waste of time anyway...I'll just go back to surfing the internet... :)
Posted by Jenny at 8:47 PM No comments:

How Deep the Father's Love for Us?

Behold the Man upon a cross
My guilt upon His shoulders
Ashamed, I hear my mocking voice
Call out among the scoffers

I will not boast in anything
No gifts, no powr's, no wisdom
But I will boast in Jesus Christ
His death and resurrection

Why should I gain from His reward?
I cannot give an answer
But this I know with all my heart
His wounds have paid my ransom
Posted by Jenny at 10:33 AM No comments:

Why do you make marshmallows in your hot chocolate that melt upon impact with hot water? Is there really a point? If a successful dehydrated marshmallow recipe cannot be achieved, may I suggest at least including an extra packet of dehydrated mallows so the consumer can feel like he or she is drinking hot chocolate with marshmallows? Just a thought.

Jenny The Consumer
Posted by Jenny at 8:53 PM No comments:

Saturday I started a new plan to read the entire Bible in a year. I have attempted a plan like this in the past and usually reach an impasse in Leviticus. If I could only make it over the ritual and tabernacular details that are Leviticus! I know there is a lot of good stuff in there, you just have to be awake for it and that, I hate to admit, is my problem. So, in order to really read the Bible in a year, I have been in need of a plan that does not hinge on Leviticus in the beginning. Obviously, I will still need to read it, but it would be nice to be further up the trail for motivation's sake before I try to scale Everest.

Thankfully, my ESV Study Bible has just such the plan! It breaks your daily Bible readings into four sections: Psalms & Wisdom Literature, Pentateuch & the History of Israel, Chronicles & Prophets, and Gospels and Epistles. This way, I can read through Leviticus and still have some soothing Psalms or Proverbs to keep me going and motivated! :) So far I am really enjoying it!

You can check out the plan or join me at http://www.esv.org/biblereadingplans.
Posted by Jenny at 6:54 PM No comments:

Cadburied by My Own Husband 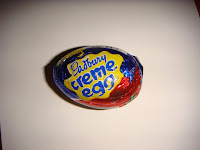 Joey knows not what he has done. He brought home Cadbury eggs tonight. I am not allowed Cadbury eggs. Reason why? Ask my last roommate, Liz. The two of us are not trustworthy when it comes to Cadbury eggs. Last Easter, we bought a small carton. It was gone in an incredibly small amount of time. We're talking maybe a day. So Cadbury eggs were banned from our apartment. We couldn't "just eat one". I am cooking a healthy dinner of baked chicken, spinach, and baked sweet potatoes and then WHAM! Sabotage! Unknowingly, Joey has opened a whole new carton of eggs...
Posted by Jenny at 8:14 PM No comments: