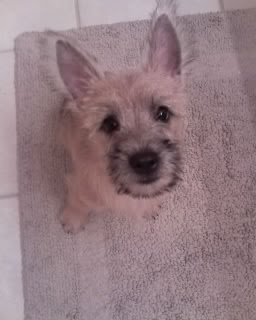 Meet Bogart. He is aptly named after Humphrey Bogart because of the 5 o'clock shadow he has around his mouth. Since he's still a puppy he has a little bit of growing up to do before he fits the seriousnous of his name. He's not quite to the maturity level to justify his saying "Here's lookin' at you kid". So that's why we call him Bo. Bo is a Cairn Terrier, which is the same breed as Toto from The Wizard of Oz. He is about 4 months old. We had been looking for a puppy, but Bo was more of an impulse purchase. He was the only one of his litter left. He's so cute! We wondered why nobody ever picked him? When we took him to the vet a little light was shed on that question when the vet exclaimed "He has HUGE ears!". So it looks like he might have been left behind due to his ginormous rabbit ears. BUT, I think they are his cutest feature.

Bo is a bit mischeivious. He is not completely potty trained and does not differentiate between the patio and the grass. We're working on it. For those of you who met Gus in an earlier post, you might wonder how the introduction of a new puppy might rock Gus' world. Well actually, Gus has been a model citizen since Bo came around. I think Gus might feel that he is responsible for Bo's proper upbringing. He is a role model now. It's a long shot, but remember that movie Homeward Bound? We've totally got the Shadow/Chance relationship going on. Bo is constantly antagonizing Gus. And Gus just takes it like a champ. In fact, he finds Bo amusing. He watches him do something that he was doing only months earlier and just sighs and rolls his eyes like he's saying "Gees, puppies...".

As I type this, Bo is in the doghouse with Joey. Bo has managed to chew on the wiring to the patio lights and now only one side lights up. He has found the Achilles' heel of the back door and there is now a small hole in the frame. He has nawed on the patio fence and we now have a more weathered look going on. So as you can see, the problematic commonality is chewing.

By the way, Joey pointed out to me that we have named our dogs Bo and Gus, or Bo-Gus. Totally unintended.
Posted by Jenny at 1:21 PM