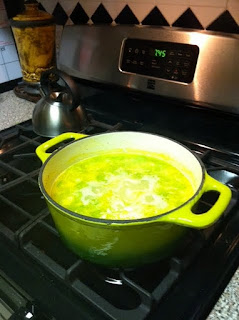 An aside: Today I was wearing my Never-Wear-to-the-Grocery-Store heels. Where did I find myself? The grocery store. Soup, remember? Painful trip. Good thing the shopping cart also double as a walker. They should make throw away flip flops similar to those at the salon for such occasions. Check your heels at the door.
Along with suggestions, pimentos should be next to the olives. They're actually IN olives. Peas are next to carrots. It's only logical that pimentos and olives be neighbors on the grocery aisle.That's all I have to say. I may have lost two pinky toes in my condition due to a quest for said pimentos.
In other news, I found out that Joey doesn't like "red things" in soup. He's had a hard day so I made soup sans red things and didn't mention the those pinky who made sacrifices for the other 'tos.
They say you don't need pinky toes anyway.
Posted by Jenny at 9:03 PM