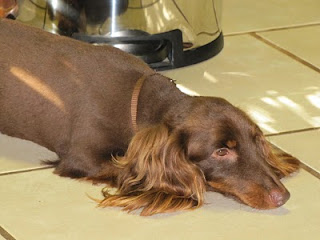 Sweetest thing. Do not be fooled by the reclined pose above. Mocha is a very energetic and happy dog, hence unblurry photo opps are rare.

Mocha is a 3-4 year old full-bred long-haired miniature daschund. Wow, that was a mouthful. Oh, and despite the slightly effeminate name, Mocha is a boy. Sometimes I call him Mo, just so he doesn't get a complex - like men who are named Sandy or Frances.

Mocha wants nothing more than to be loved. He wants to be held and petted all day. At first, Mocha suffered from a little bit of separation anxiety. You leave him in another room and he would freak out. But kind of like a little kid who isn't used to eating regular meals is frantic to fill up at a real meal, Mocha seems to think that it might very well be the last time you love on him so he really takes it up a notch. Now that he realizes that there will be more attention and love to come, he's relaxed a little.

My family fell in love with him over the weekend: 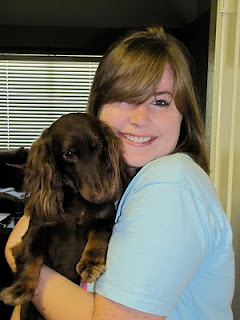 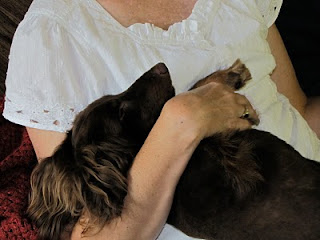 Mom was especially head over heels for Mocha.

As he's only 12 pounds and tiny, she held him like an infant for long periods of time as if Mocha was a pseudograndbaby.

Joey and I really want to keep Mocha. We love him. He is just so precious. However, Mocha is not so loved by the other members of our family: Bogart & Gus.

Bogart sees Mocha as a Usurper of Attention. Mocha has also taken over Bo's kennel while Bo sleeps in his bed (that Mocha chewed on). It doesn't help that Mocha has a physical attraction to Bo. Although I have to say that it is slightly amusing to see a much larger Cairn Terrier running in circles away from a tiny weenie dog. Gus, on the other hand, refuses to leave the garage. He's on strike. No really, he plants his feet and refuses to go outside. I'm expecting picketing signs next.

So as you can see, a third dog has created chaos. And I haven't mentioned it much, but Gus is also getting older and is becoming really snappish especially toward Bogart. This has been happening for some time, but throwing Mocha into the mix isn't a good idea.
Which is why have to give Mocha up. We have a few folks that have shown interest in Mocha, but the timing just isn't right. If you know of a loving home that would like to add little Mocha to the family, please let me know. He really deserves a place where he can be the center of attention.

Just typing this makes me sad that we're going to have to give him up. I'm having second thoughts about posting this, but Joey and I have agreed. So there you are.

P.S. If you're male and your name is Sandy or Frances, I'm sure you are very manly. Nothing against a decision that your mom made. It's not your fault. Promise.
Posted by Jenny at 11:59 AM