This weekend I'm in Livingston with family. This has brought up a lot of reminiscing about what we were doing this time last year. We were working like labor camp workers to get the backyard wedding reception ready after Ike decided to crash the party. All purely on faith that a wedding would happen in two weeks. My Mom and I were looking through the pictures that she had and I decided they needed to be posted along with the stories that go with them.

Here's the picture I was referring to in the last post: 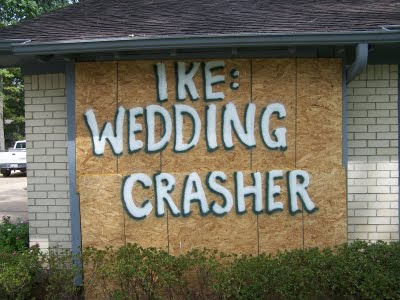 Yes, this is our front yard and yes, we are hillbillys. My Mom had this urge, that's the only word I have to describe her strange determination, despite my wishes, to spray paint this for all the world to see. I can only make sense of it by thinking that maybe as an artist skilled at painting and drawing, this was her expression of anger at Ike's plan to rain on her baby girl's Big Day. Instead of raising her fist skyward, Mom, like an Indian warrior putting on war paint before battle, chose spray paint as her medium of defiance. Ball of emotions that I was, this made me so mad at the time as I just wanted to keep it to myself, but for whatever reason she just had to do it. Most of the time it makes me laugh to think how upset I got, most of the time. It was like Clash of the Titans, me and Mom over this plywood "work of art". In the end, Titan Numero Uno won and we have this masterpiece to remember it by.

When we were all huddled in my parent's hallway the night before the 13th when Ike came whipping through, I really thought we weren't supposed to get hit that bad. Houston, yes, but Livingston would just get some major wind and rain. I was upset of course that the wedding was postponed, but I was banking on the calm after the storm. When we walked outside for the first time, my heart sank. And I know now that north of Houston was one of the worst hit areas. 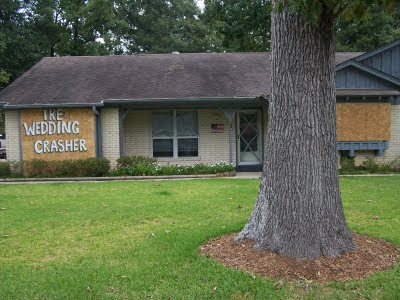 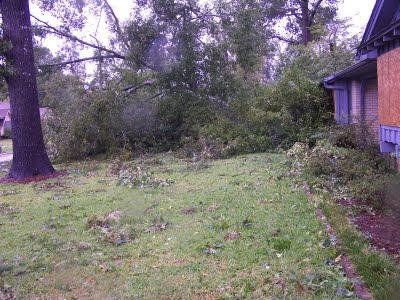 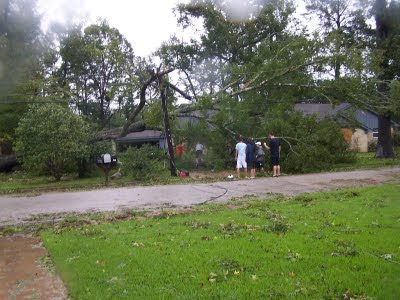 Here are a few more pictures of what Ike left us to work with: 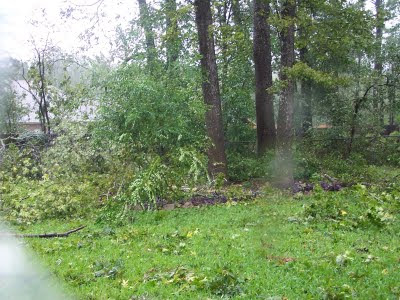 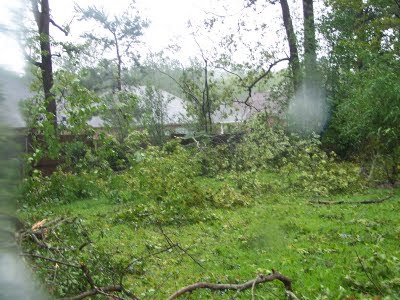 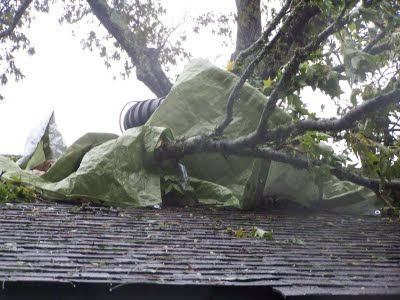 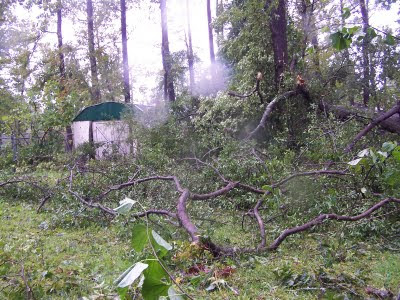 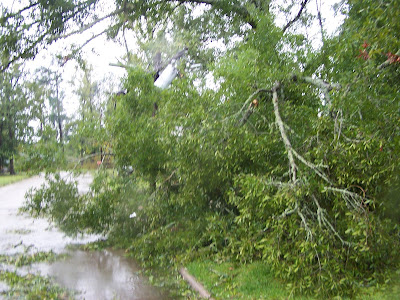 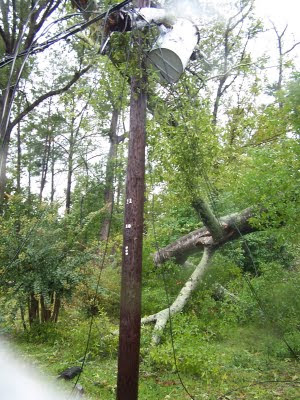 The transformer - one of the reasons we were unsure if we would have power in two weeks. 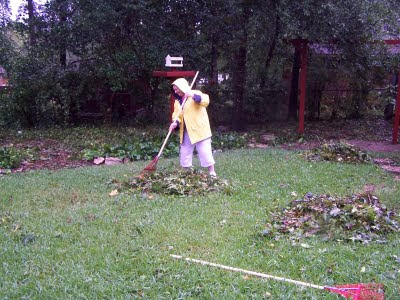 I have to tell you about this one. Like I said, when we walked outside, we were all heartbroken - every single one of us. We had worked so hard on that yard all summer. Before the hurricane, Joey had joked, "Well, if we can't get it together, we'll just go to the Justice of Peace!" It was a joke, but I knew their was a bit of true sentiment behind it. When we walked outside for the first time he wasn't saying much, but I knew that's what he was thinking we were going to have to do. And I was thinking not after we had spent months in wedding labor. I was not going to give in. I was going to walk down the aisle in my wedding dress so help me God. So I was scared that he was going to tell me this and I didn't know what I was going to do. What if we couldn't get the wedding together in two weeks? It didn't seem right to postpone it again, but at the same time month's of work going to waste?
There was so much work to do and it did look grim but, I was defiant. It was an hour or so after the hurrican and still raining, I picked up a rake and started raking leaves and debris in the drizzle. It looked ridiculous I'm sure, to be raking leaves when there were huge trees and limbs down all around, but I had to prove to Joey that we could do it. I had to show him that there was green grass under the mess. I told my Mom what I was doing and she picked up a rake too. The picture above is of our neighbor Sherry. She came over and saw us raking and wanted to know what we were doing. I'm sure she thought we were completely crazy, obliviously raking leaves in the midst of huge fallen trees. When we explained that we were trying to avoid Joey making the call to get married by the JP, she picked up a rake. Her own yard and house was probably hit worse than ours and there she was, raking leaves with us. She was an absolute angel. She and her husband put our needs above their's constantly and unselfishly day after day until we got married.

It turned out that we had people come by with their chainsaws, bulldozers, and rakes to help out. Here are a few pictures of people who with their help made our wedding really happen. 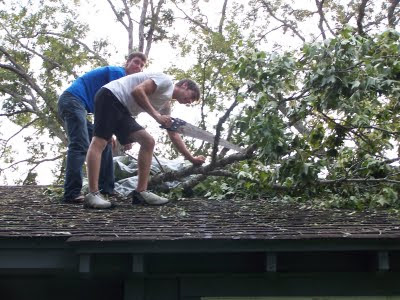 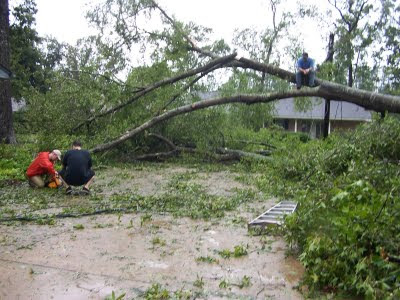 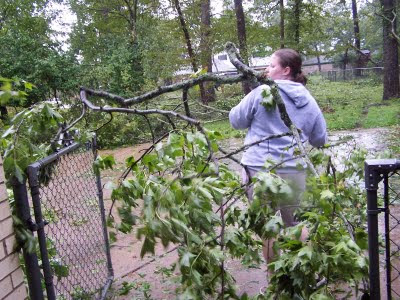 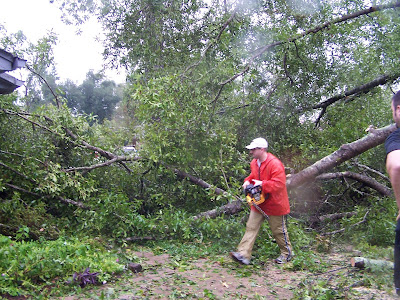 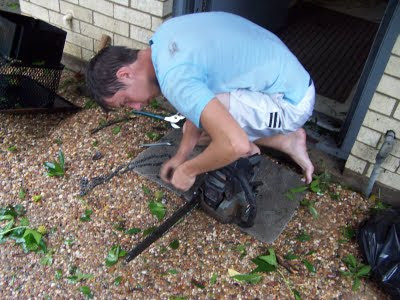 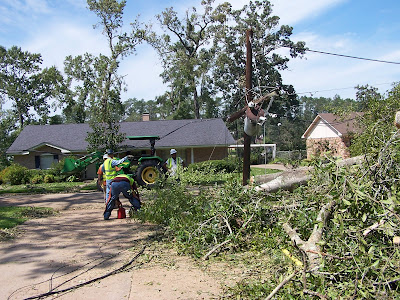 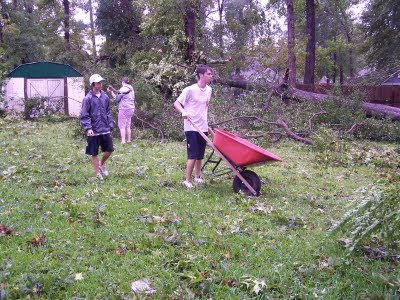 As bad as all of this might look, we were blessed. Many of our neighbors were hit hard. Here's a quick look of around the neighborhood: 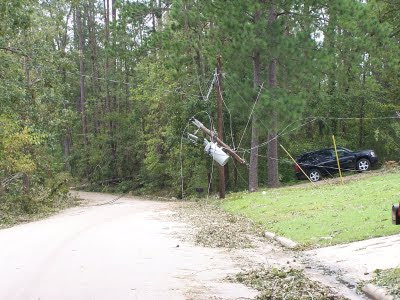 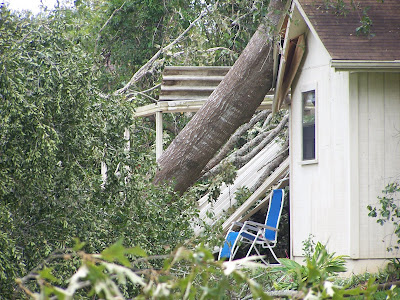 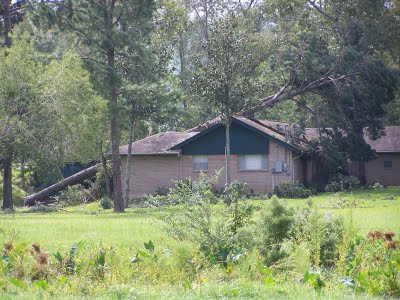 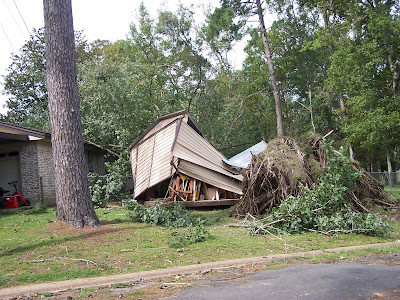 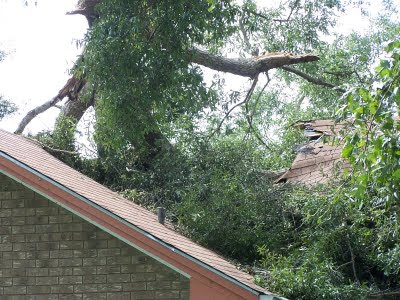 We were really blessed that we did not have huge trees on top of our house like some of our neighbors. We had the most kind and giving people come to our aid and unselfishly give their time and physical effort, all the while knowing that they had work just like ours to go back home to. It was a time for Joey and I, mostly me, to check our priorities and be thankful for what we have.
And if you are wondering, yes, the Ike Wedding Crasher piece survived, in fact, that part of the house narrowly missed being crushed in by a huge tree. Makes you wonder... :) 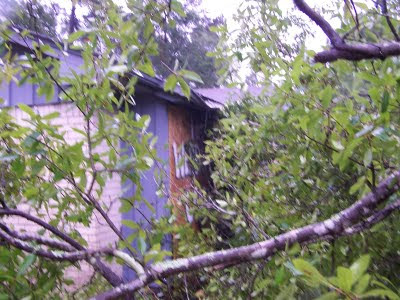