About two months ago I opened our front door to find several gently used children's books on our porch. At first I was puzzled as to who would drop off books, but then I opened them. 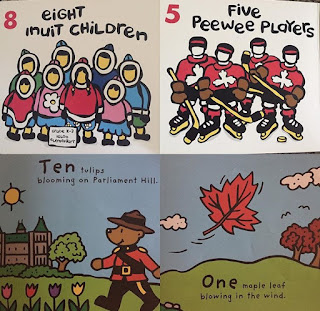 I don't know what gave it away first - husky dogs, hockey, Inuit children or Parliament Hill. And then there was the maple leaf on the cover of one. It had to be our thoughtful Canadian neighbors. Don't you love people who love your children? It was so sweet of them to think of Claire.

Claire immediately wanted to read her new books. Two of the books are counting based, one with a map of Canada and one is a book about a Canadian goose. Most of the content is along the line of "There are six hockey pucks." She thought the hockey pucks were poop. It's an easy mistake.

She loved the books. We read them several times throughout the day. I added them to the bookshelf and called it a day. Like most of her books, I figured she would cycle through these over the next few days since they were new and then they would most likely fall in with the rest of the books on our reading rotation. Not so.

These books have some crazy Canadian powers. One in particular, "the red one", we read at least once daily. She's started "reading" in her crib before she falls asleep and asks that "the red one" is in the bed with her during naps and at bedtime. Or "Goose", the one about the Canadian goose (not to be confused with "Duck and Goose", a delightful tale about a duck and goose who team up to find a pumpkin.)

Claire has been calling black birds "loons" and there's a good chance that she thinks football players play "hockey". She loves me to tell her the name of each Canadian province on the map. She's Canadian obsessed.

This may be why she also loves a book entitled 'Snow'. We like to read practical literature around our house - content that can be put into every day use around the streets and suburbs of Houston, Texas.

I feel the need to get her a few books with American symbols and maps just so she doesn't become disappointed when she finds out that she is not Canadian. And I better not tell her about their bacon. The girl loves bacon and she doesn't need to know that they have a variety all of their own.

In the meantime, I'm brushing up on my knowledge of Canadian provinces - every day - several times a day. Eh?
Posted by Jenny at 2:18 PM