What We've Been Up To 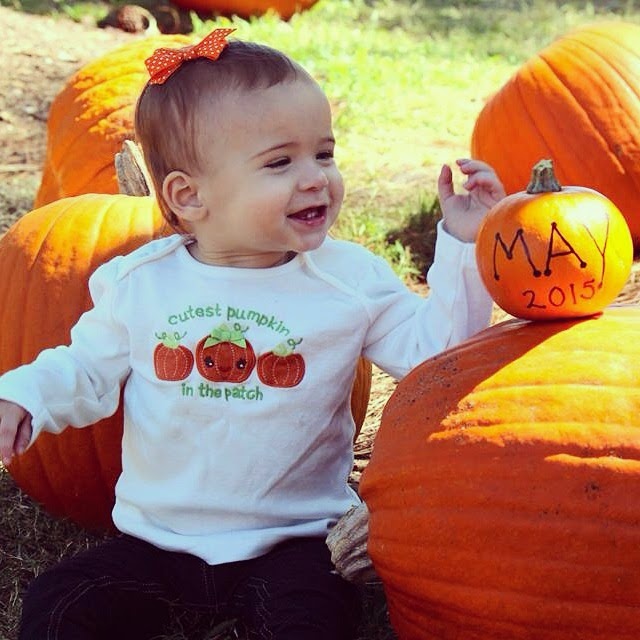 Let's see, where to begin? How about we go with the order of things? I'm pregnant! We celebrated Claire's first birthday in October. I resigned from my job about three weeks ago and am now officially a full time stay-at-home mom. We're getting ready to put our house on the market. That's about it in a nutshell. The only anticipated thing was Claire's birthday.

So, these are all my excuses as to why I have not been posting to this blog. I've been stunned into paralysis for the past three months. A very active paralysis if it makes sense. If it doesn't make sense, I'm blaming it on pregnancy brain. Just go with it.

I'm about 14 weeks pregnant today. It was an early August night when Joey asked me what I wanted on my pizza to which I responded "I can't even think about that right now." and showed him a positive pregnancy test while balancing Claire on my hip. We ordered the pizza a few hours later when we both recovered from our shock.

We are super excited! It was pretty surprising news. It took three years for us to get pregnant with Claire and although we had discussed growing our family, it wasn't something on the very immediate horizon as in before Claire turned one year. Or so we thought. God of course, has had other plans all along.

I was a little nervous going to the doctor. We've had two pregnancies with two different outcomes. We've received devastating news and over the moon exciting news during that first visit. I walked into that office with peace about both, but hoping for that over the moon moment again. There are few moments in our lives that compare to the excitement and thankfulness upon seeing a little baby's heart beat on the ultrasound screen. It was another over the moon moment! We are so thankful God chose us to be parents to this sweet little one.

This brought us to the point of making a few decisions. Claire's pregnancy was roses up until I was diagnosed with gestational diabetes around 24 weeks. It took a lot of effort to manage my levels and I barely stayed off insulin. I had been working from home part time which was pretty difficult to balance with an almost one year old in the house any way. I worked during all nap times and some while Claire was awake and running around. Joey and I made the decision that it was time for me to resign. I'm thankful that it was an option and fully believe it was the right thing to do for our family. Absolutely no regrets.

The next decision came to the house. We love our house. We love our neighborhood. It's been the perfect size for our family of three. And although a little tight, it would still work with our new little one on the way. However, it just may be that this is the right time to make a move with the current market. After visiting with our realtor and getting an idea of what we're looking at, we'll be shooting for first of the year. Eek. It was so much easier buying a house when we lived in an apartment and didn't have to worry about selling a house. Anyway, if it all works out then we'll move and if not we're perfectly fine with sitting tight.

During all this, my baby turned one. I'll devote an update specifically to this Big Girl in the next few days. Watching her personality develop the last few months has been so fun. She's precious.

Who knew so many changes would be coming our way in a matter of a few months? God has given us peace about each one and we are so thankful.

And now that I'm fully a stay-at-home mom I have taken up knitting, the Real Housewives of Somewhere, wearing my pajamas until noon and am contemplating making my own bread and soap.

Only two of those are true. Can you guess which ones? Ok, it's the bread and soap, but that's in the Advanced Homemaking class and I have yet to take the prerequisites like Making Dinner Both Parents and One Year Old Will Enjoy and How to Get Smashed Green Bean Stains Out of Toddler Clothing.

It is also true that sometimes Claire runs wild, but now I get to run right alongside her with a little bit more freedom. Many over the moon moments to come!