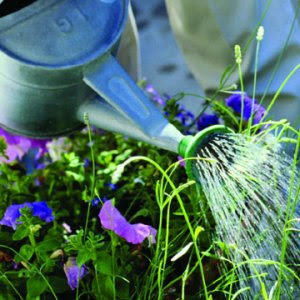 Joey and I are working on our backyard. He has drawn a very precise schematic diagram fleshing out exactly where each bush, stone and blade of monkey grass will be placed. Have I told you that Joey is precise? He's precise. Maybe not with socks or used towels - but in yard work, he's precise.

The weeds I am pulling are the weedy grassy kind. A poor man's grass. The kind that look so small on the top, but has an intricate root system below. The kind that if you're not careful to pull up slowly will come back to bite you as a Triffid next year. The funny thing about these guys was that they looked so small on the surface. Who would know that the roots could go so deep and spread so far?

When you're pulling weeds for hours on end, you're left alone with your thoughts. Just you and the weeds. So being a deep thinker prone to think about the meaning of life, I let my imagination run wild and think about...weeds.

No really, how did they got such a bad rap? I mean, who was it that designated them the "undesirable" plants?

The reason lies in the fact that weeds overtake the garden and choke out the other plants. By definition, a weed is one that is usually not valued where it's growing and grows vigorously.

It made me think about weeds in my life. Anything that God doesn't want in my life is basically just like those weeds. What do I need to get rid of that is actively choking qualities that God wants me to cultivate?

"As for what was sown among thorns, this is the one who hears the word,
but the cares of the world and the deceitfulness of riches choke the world, and
it proves unfruitful."
Mt. 13:22

"The Kingdom of Heaven is like a grain of mustard seed that a man took
and sowed in his field. It is the smallest of all seeds, but when it has
grown it is larger than all the garden plants and becomes a tree, so that the
birds of the air come and make nests in its branches."
Mt. 13:31

Am I cultivating weeds when I could be cultivating the Fruits of the Spirit?
Posted by Jenny at 9:12 PM