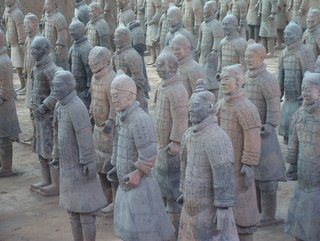 So this past week Joey comes home really excited and says that one of his customers gave him the coolest gift. He starts digging around in the back seat of his truck with his back toward me. "Oh really? What is it?" I'm thinking his customers, hmm, he's in the lumber industry so what could it be? Some kind of furniture possibly. Or maybe something to do with our bathroom that we are working on. He turns around with this: 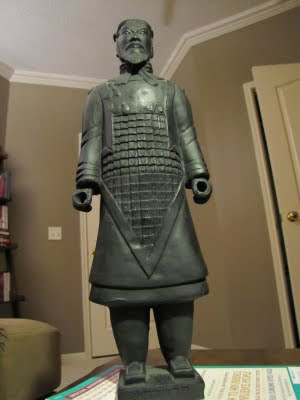 Yikes! Oh my goodness! Joey says "Cool, huh?". Umm yeah, sure...cool! So...what is it? "It's a Terracotta Warrior." Oh I see...pause not really seeing...What's a Terracotta Warrior? "Back in the 70s they uncovered thousands of lifesized statue warriors like this in Asia circa 200 B.C. They believe they were constructed to protect the Emperor and the kingdom in the afterlife." (Yes, he really said this. It was like I had turned on the History Channel complete with dates and references to the Ming Dynasty...or something like that) Oh. Slightly frightening don't you think? (the Terracotta Warrior was giving me a fierce eye at this point). "I love these things!" Oh ok, well I'm glad you love it! And I followed Joey and the Terracotta Warrior inside. 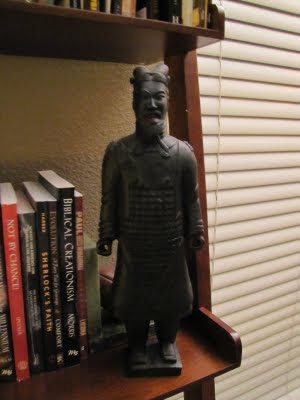 Yup. Still there. See how he's clenching his fists? A smile is the last thing on his mind. Shudder. 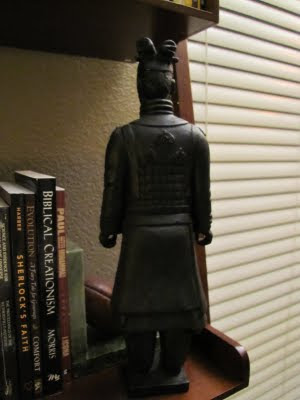 It's very mysterious how this happens. I don't know who would turn a small harmless statue around like that. It just happens. And then equally as mysterious, the Terracotta Warrior is facing me again the next day....but closer. Hmm...funny, I just looked over and he has his back to me again now. Like I said, it's very odd.

I must say, I am glad I have Heaven to look forward to in the afterlife and God to guard our kingdom. I don't have to rely on legions of Terracotta Warriors to give me peace or rest. I don't have to spend my lifetime building Terracotta Warriors. But the question is do I? That's something I can take away from the Terracotta Warrior. A daily reminder of where I need to put my hope and comfort. Maybe I'm not building physical statues, but I'm sure I have Terracotta Warriors of my own - places other than Christ where I'm putting my hope. It could be material possessions, relationships, status, success, recognition. The possibilites change day to day. It doesn't matter, they all fall short in the end. There is only one Hope to which we can hold fast and which will watchover us for eternity. Are you putting your hope in Terracotta Warriors?