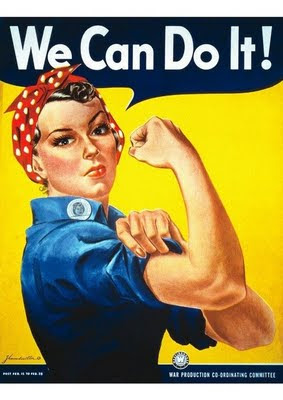 We're in a recession right? Sometimes it's hard to tell. It seems that people, at least in Houston, are going about business-as-usual with no change in spending habits. But goodness, do you remember when the term "recession" first hit us? Everybody was frantic and I heard people bringing up things like the Great Depression. Images of people standing in breadlines and scenes from Cinderella Man come to mind. If you haven't been able to tell, my mind can tend to have a flare for the dramatic if my imagination is allowed to run. I try to reel it in for the sake of everyone else, but honestly, there are times when untethering yourself from reality can have its moments And sometimes the imagination can reveal a reality that you are not quite expecting, but has its merits for being considered.

Case in point. I had let my imagination go with the above mentioned Great Depression of 2009, just for a moment. What if it happened? You always see yourself being able to get a job, whether it's a career as the one I have or one at Starbucks, sacking groceries,etc. But what if there really weren't jobs to be found? When civilizations experience a financial crisis and currency becomes weightless, societies revert back to the bartering system and trading of services.

Trading of services. This got me thinking. In the Great Depression men traded skills like carpentry, mechanical, or physical labor and women took in extra washing, ironing, cooking, sewing, etc. With wrinkle-free clothes and washing machines, two of our options are no longer applicable. So what skills would I rely upon?

Let's look at a few of my blogging friends. There's Jana. Jana's skill would be baking and decorating cakes and if for some reason party cakes were not in high demand during a recession, she could fall back on her amazing gift for making crafts and all things beautiful. She'd survive, definitely. Kris, aka Mary Poppins, if found in dire financial straits would become a nanny as she has this incredible ability to watch 25 kids at once with one eye closed and with Babysitter Club creativity to boot. If it got that bad in the States, she'd become an au pair in London. Kristen has a blog dedicated to cooking with a beautiful picture of one of her homemade pies on the front. Need I say more? Stephanie is a nurse - skill set jackpot. And then there's Krystina, who is a childhood friend and whose blog I have only recently discovered. I can't quite figure out what she can't do! Photography, cooking, crafting, sewing. Martha Stewart would be shaking in her homemade, self-embroidered boots if she took a look at Krystina's blog.

And then there's me. I'm in marketing. I can see it now. If you repair our roof, I can um...tell everyone about it. Not exactly the best for trading. I'm not really sure what I do as far as pinned down skills go. Let's break it down. Cooking. I love to cook, but I seem to make mistakes like the last batch of brownies that I misread the directions and instead of 1/2 cup of oil, 1 T water, I swapped the measurements. This left me running to the sink to strain out the water after I realized my mistake. Classic. I could do it, I just am not sure there would be a line out the door waiting to buy, you know what I mean? Sewing a button on is a stretch so that's out. What about crafting? All girls are good at that right? Well, let's just say it's an untapped skill. Gardening. I could grow our own produce maybe and then sell it. I hear my numerous potted plant casualties crying from the grave "No! Spare the others!". Cleaning. We have a winner. I AM good at cleaning. I would become a maid.

All this has led me to the conclusion that I need to develop a trade. I'm just not sure what yet. I know I need to have some of the skills above anyhow for the sake of my children in the future (and by future I mean years) in order to provide a touch of domesticity that makes a home a haven for kids. I never really needed them before, but now that I'm married I can see just how useful they would be (I'm talking about the skills, not the kids!). Why didn't I learn these things before? Now it's going to be like cramming for a test. Hopefully, bartering will not be in any of our imminent futures, but parenting is at least around my next few years' corner. Yikes! I think I need the Cliff notes...
Posted by Jenny at 3:53 PM